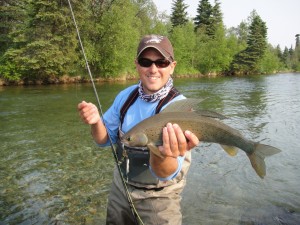 Our monthly speaker for April 22nd is Daniel Garrett from the WDFW talking about Westside Fisheries.  Please look for an Evite for the dinner count.  Please RSVP No if you just want to attend without dinner, or aren’t coming.

Danny Garrett is the Lead Warmwater Fisheries Biologist in Region 4 (King, Snohomish, Skagit, and Whatcom counties) for the Washington Department of Fish and Wildlife. Raised in Moscow, Idaho, Danny earned his Master’s degree in Aquatic and Fishery Sciences from the University of Washington in 2005 and his Ph. D. in Fisheries and Wildlife from the University of Missouri-Columbia in 2010.  Danny spends much of his time sampling fish populations using electrofishing, gill netting, and fyke netting and conducting creel surveys in lowland lakes.  In his personal time, Danny tows his 16’ aluminum boat around the region in search of the next greatest fishing opportunity.