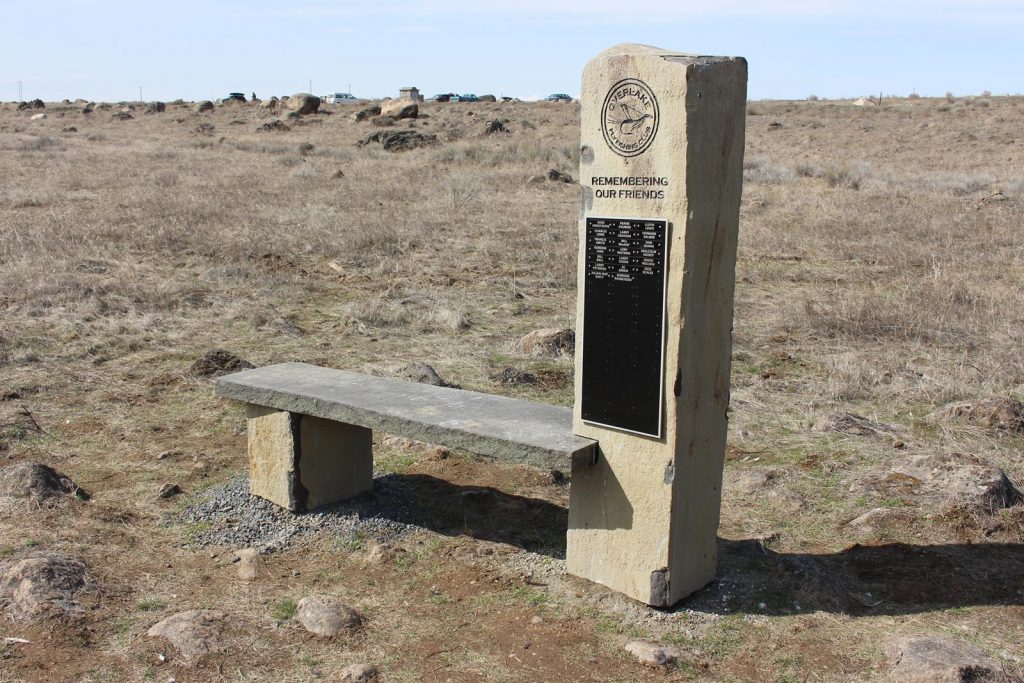 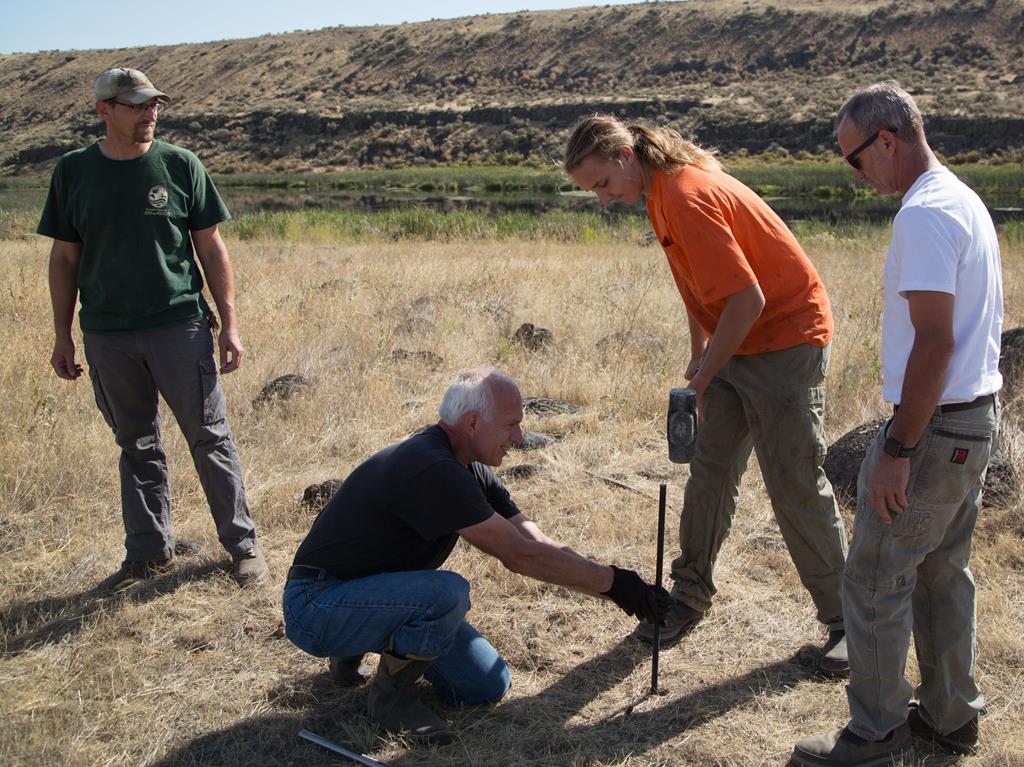 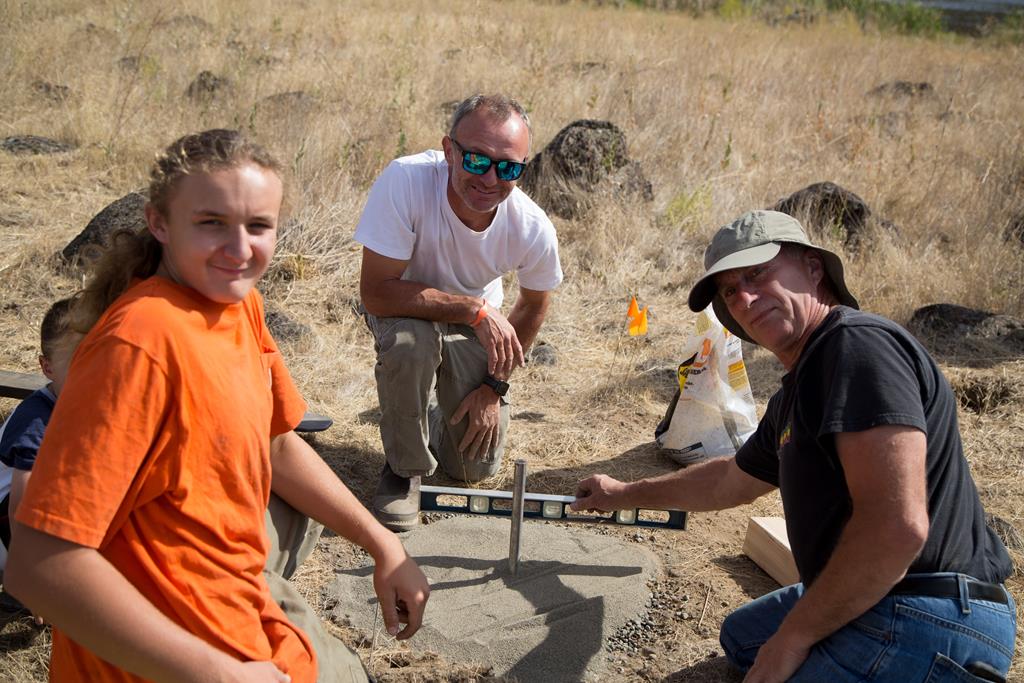 It's got to be level 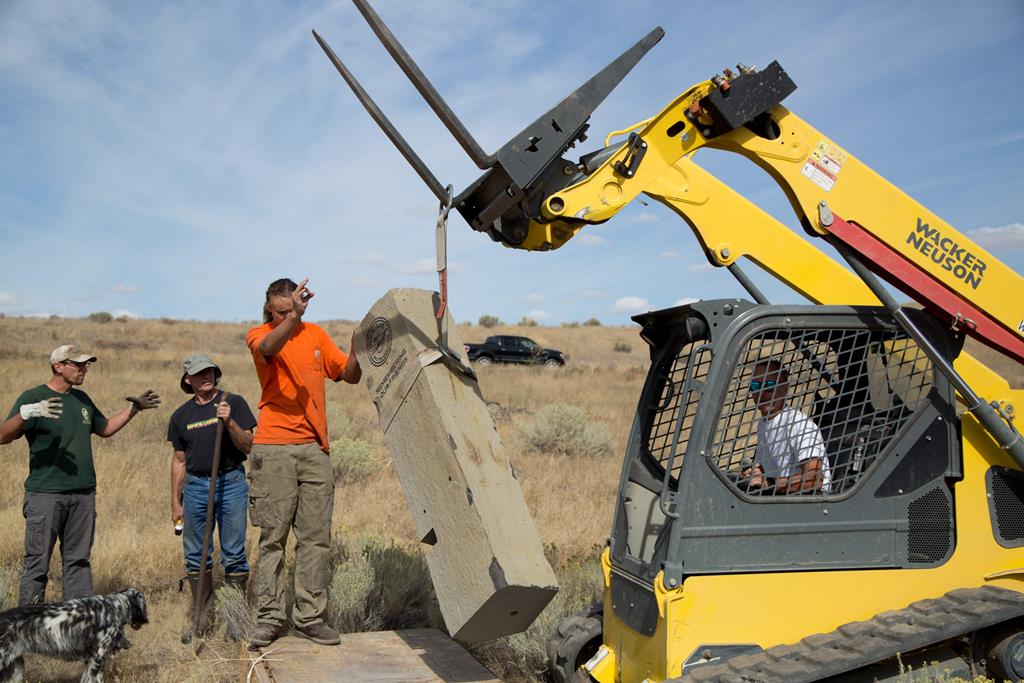 Heavy equipment made this possible 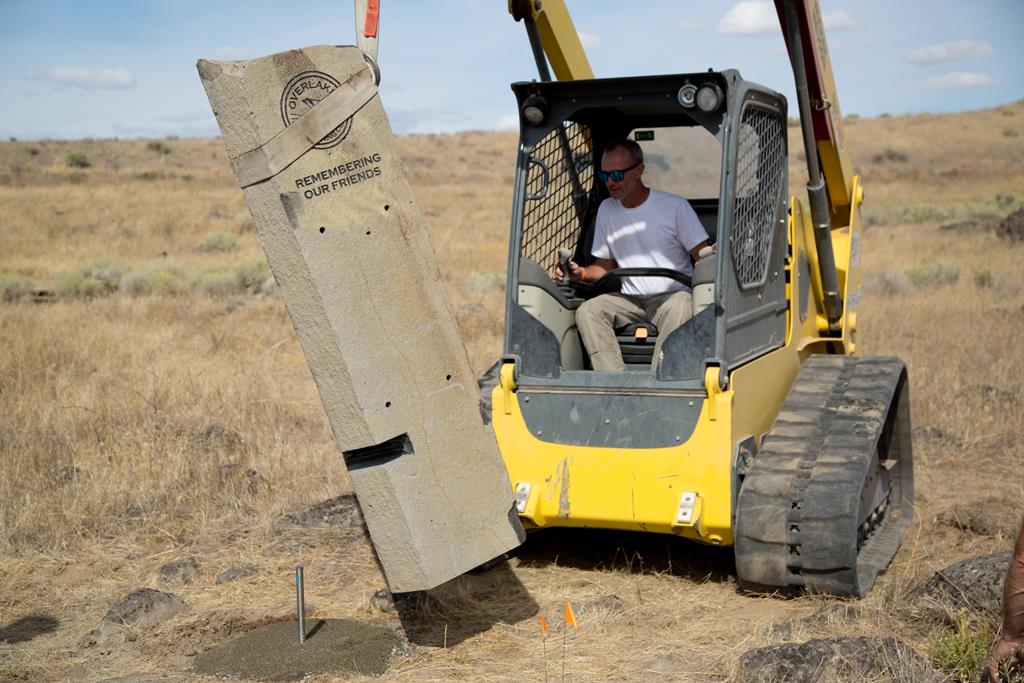 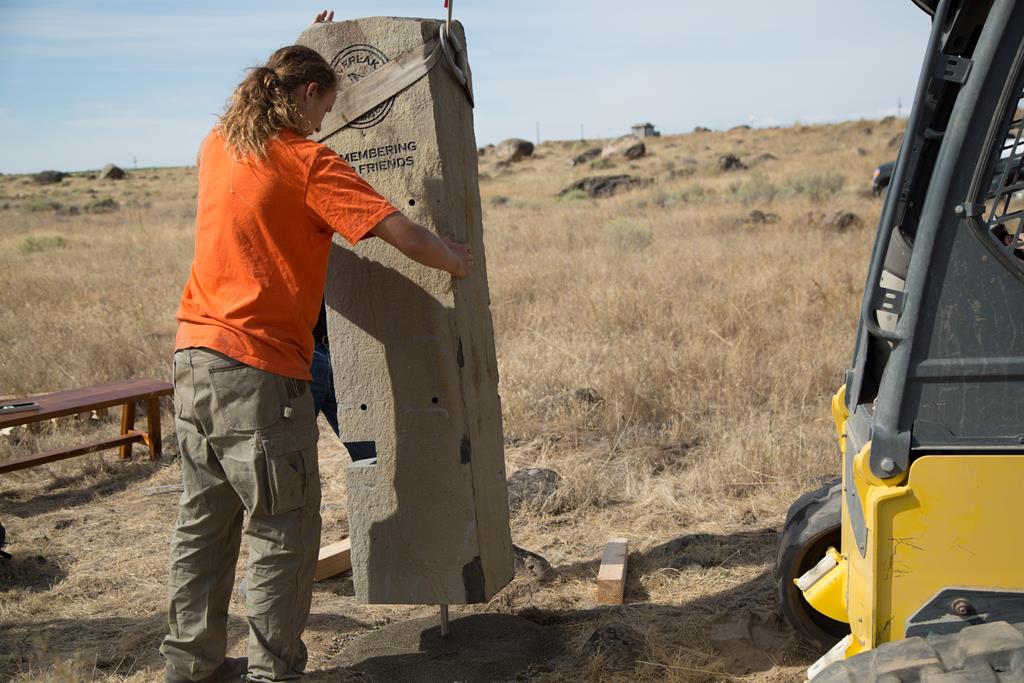 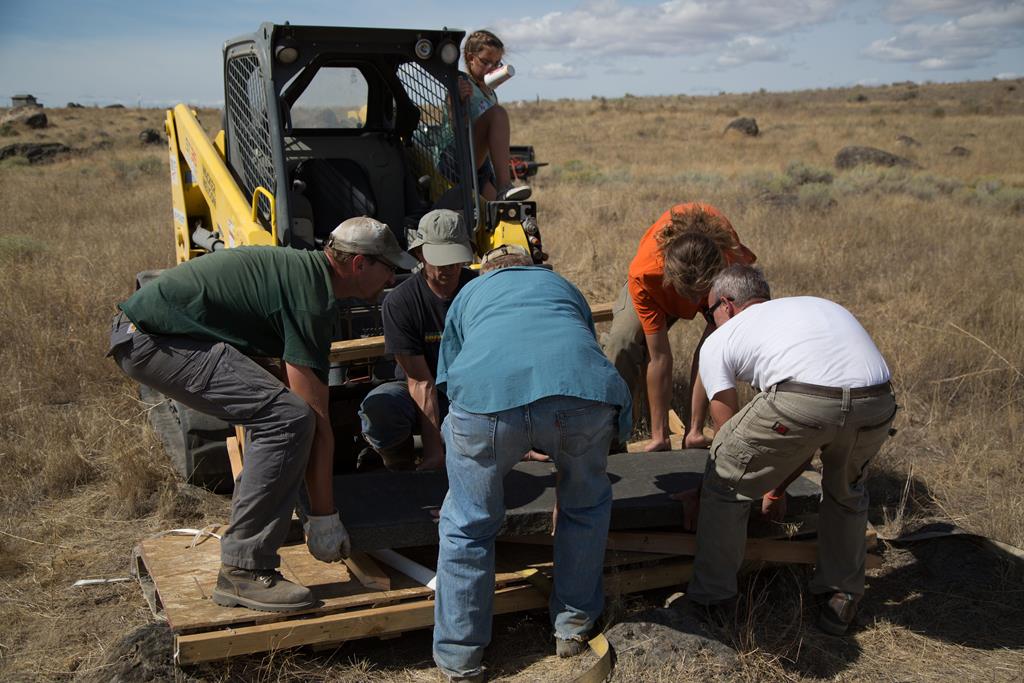 Oh this thing is heavy 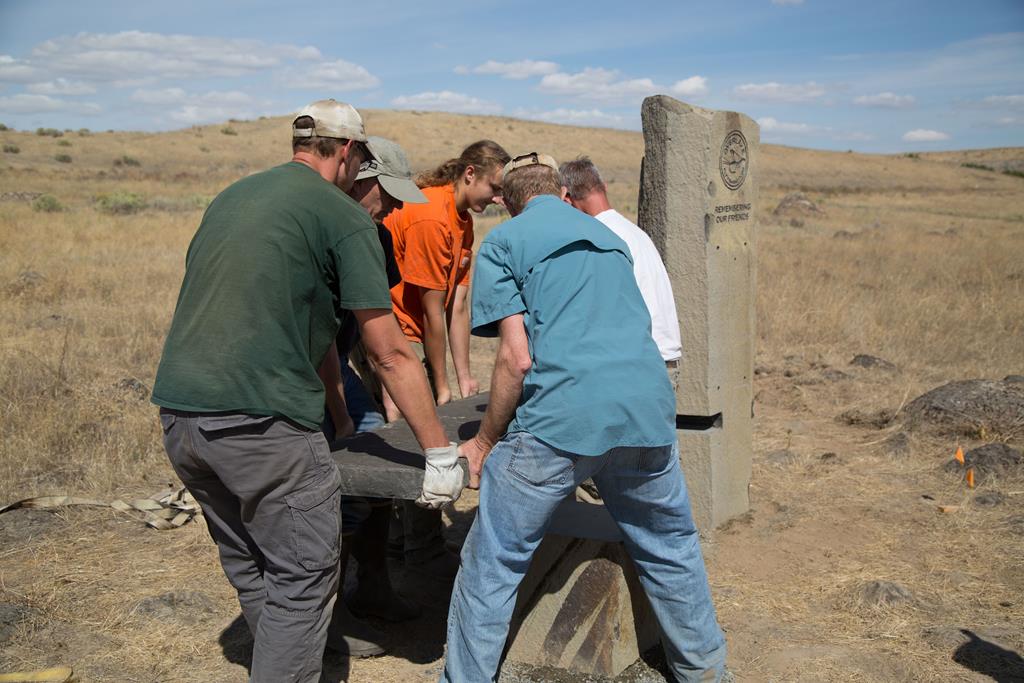 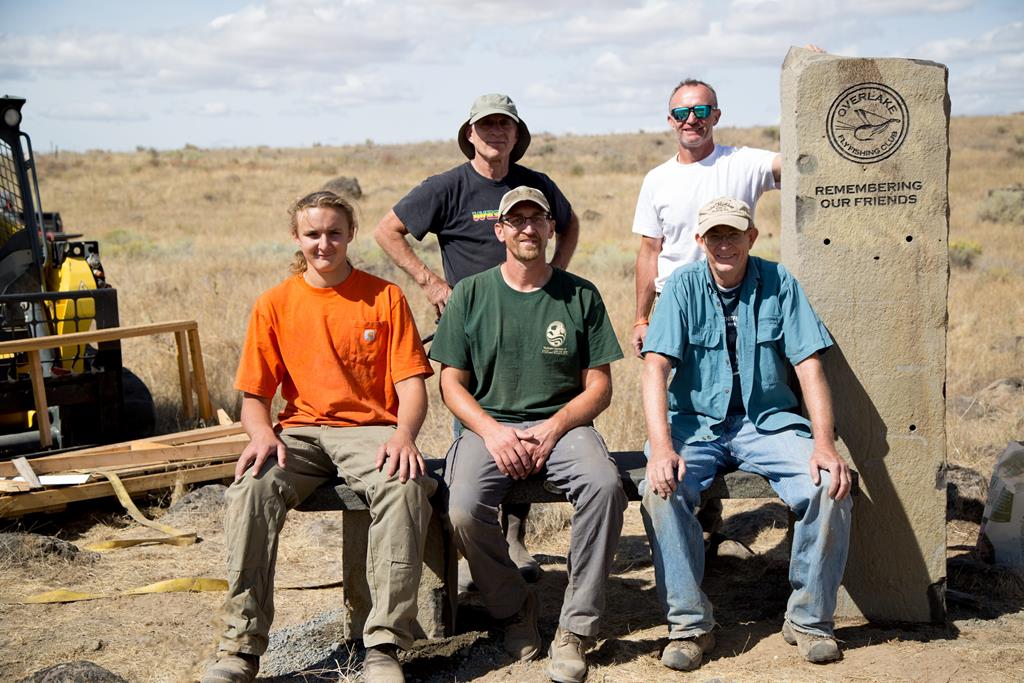 Room for three on the bench 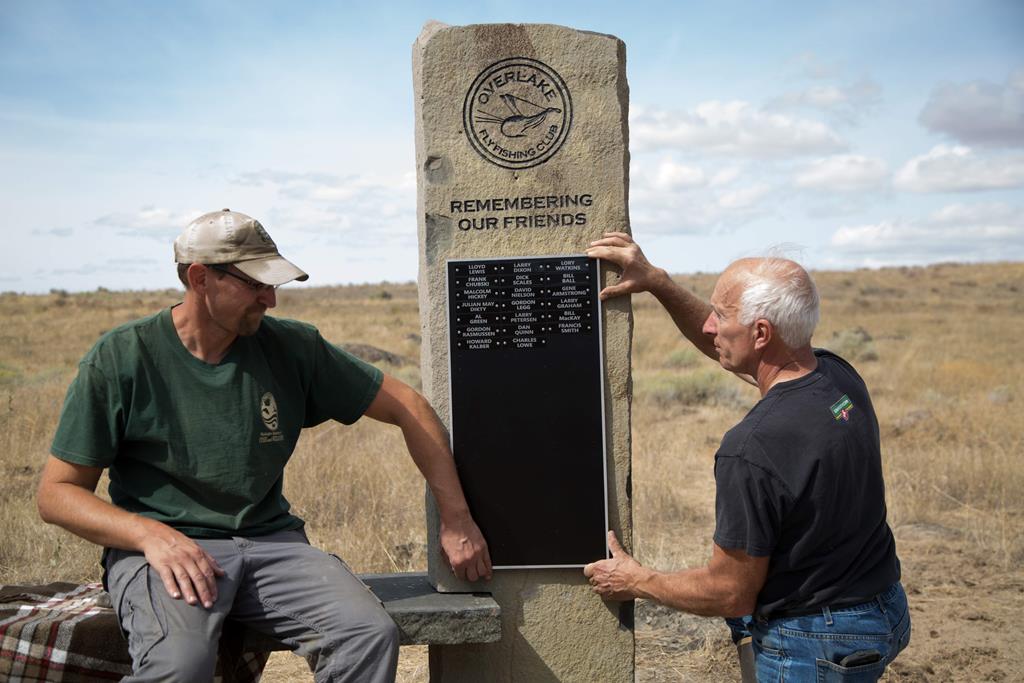 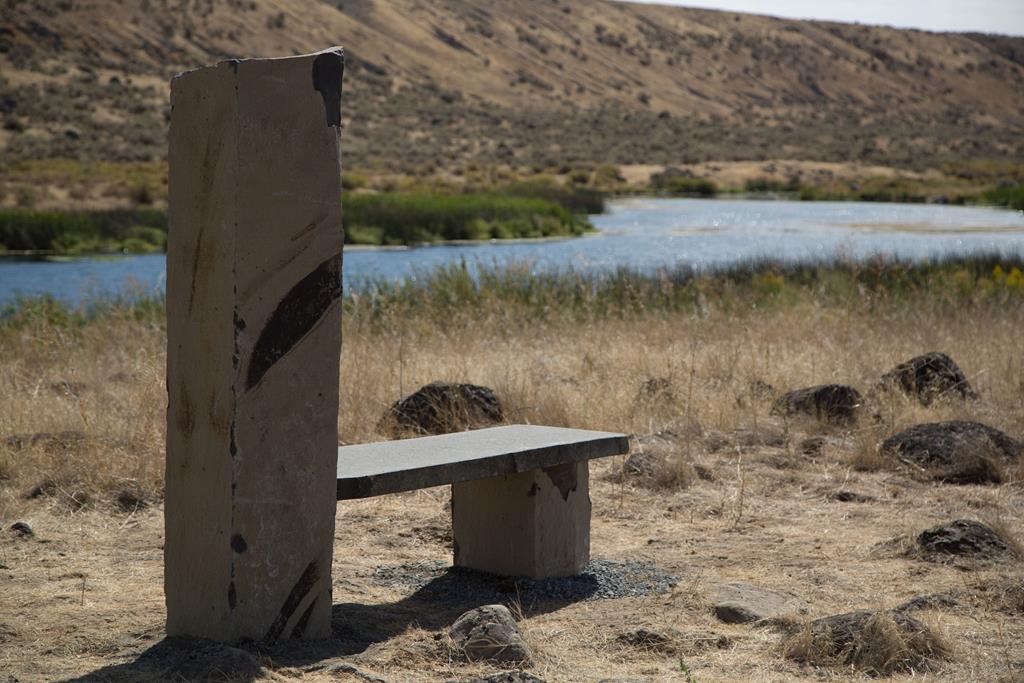 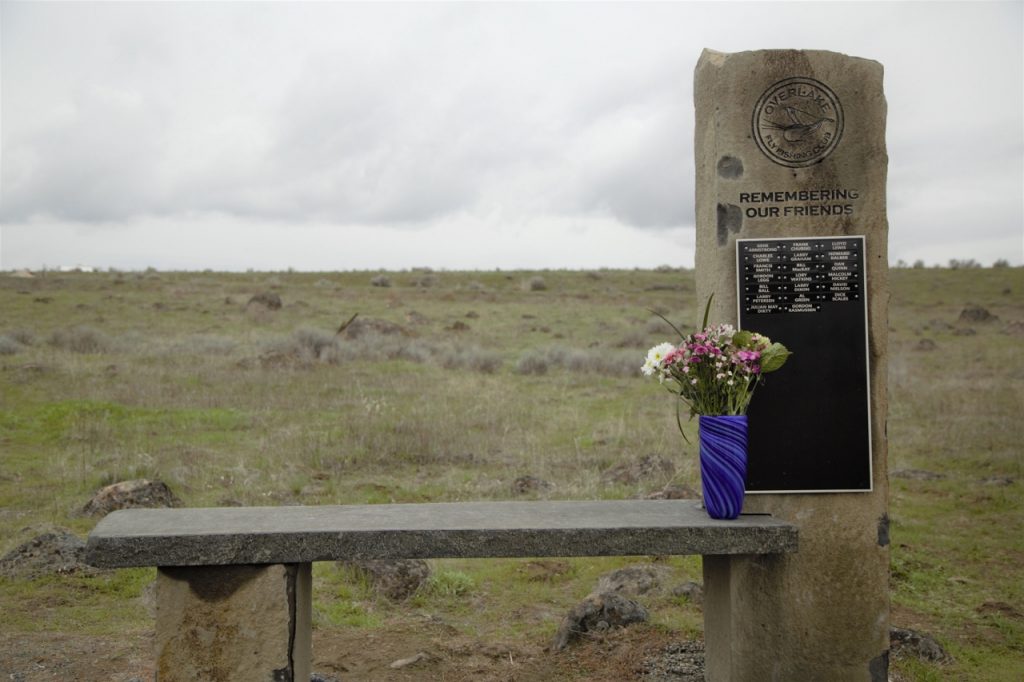 Ready for the dedication 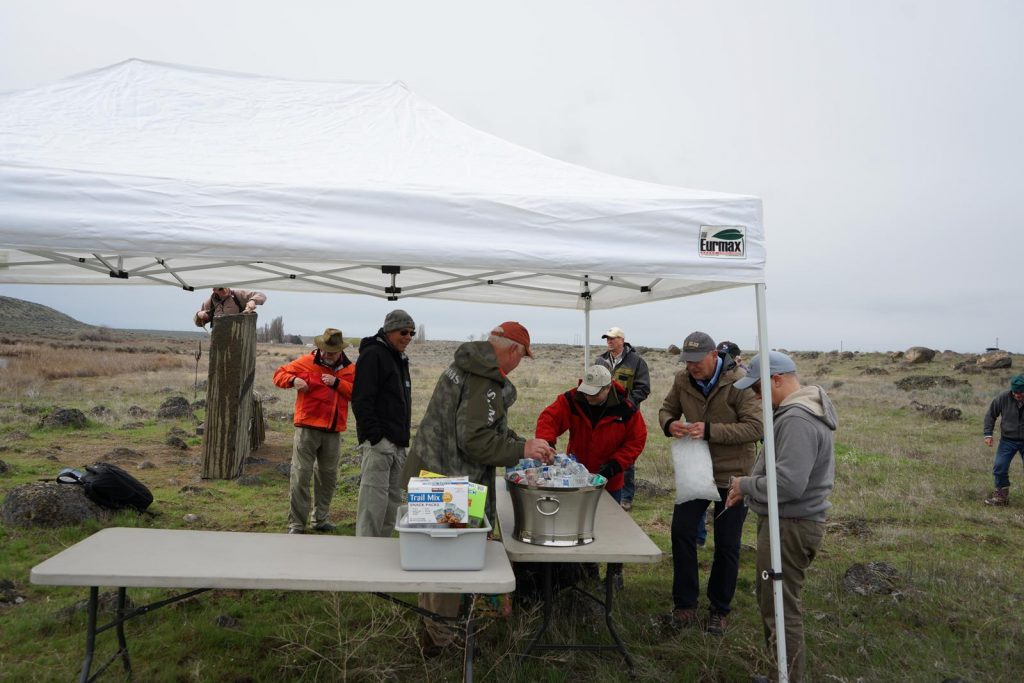 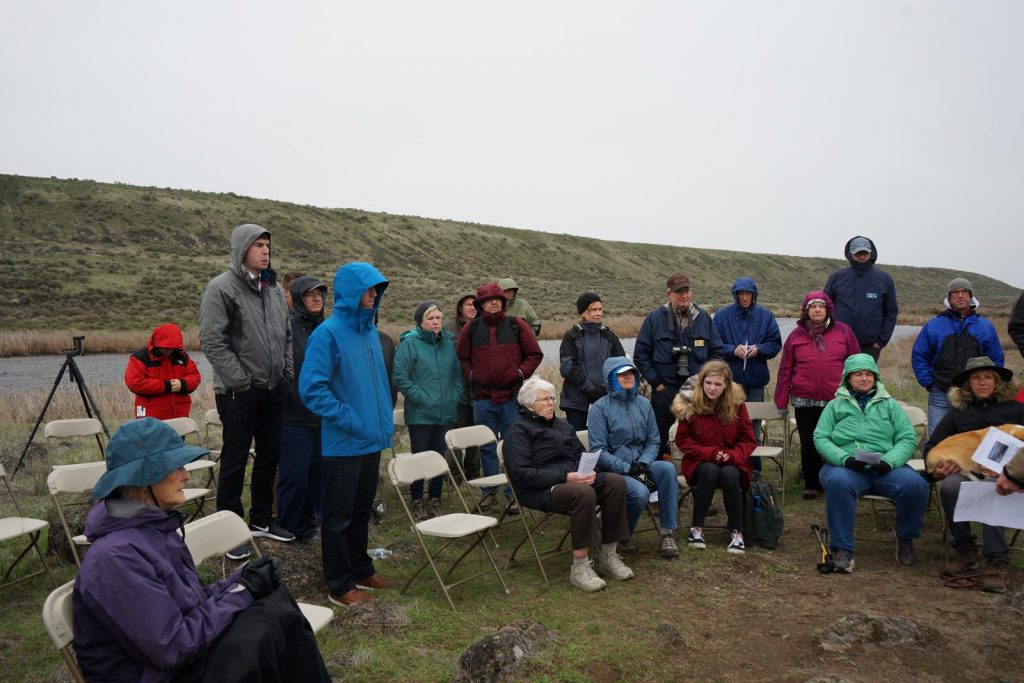 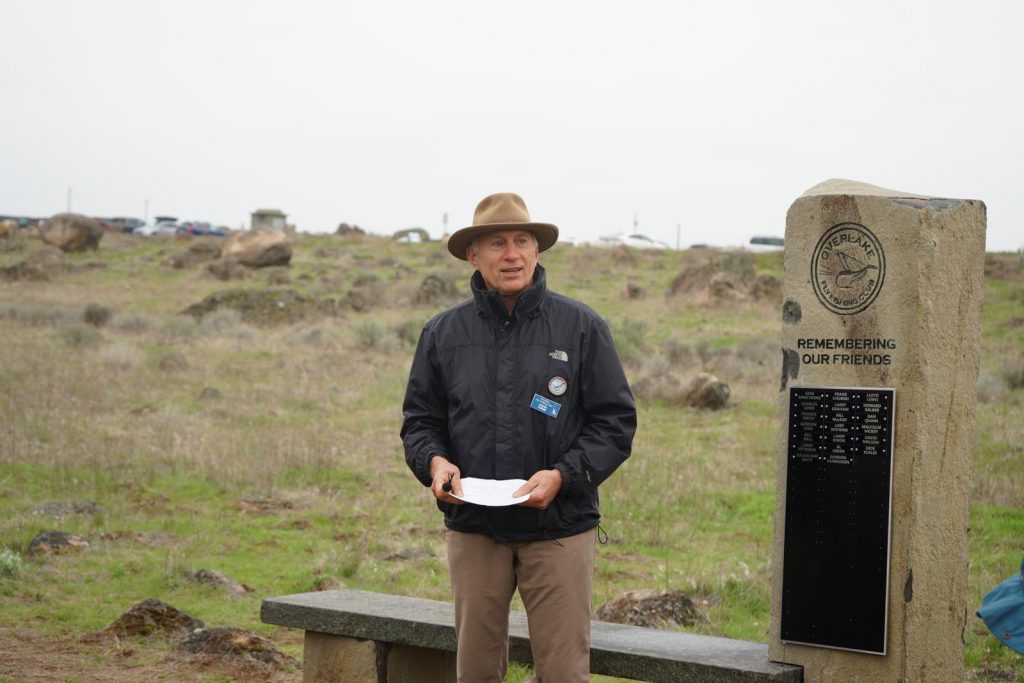 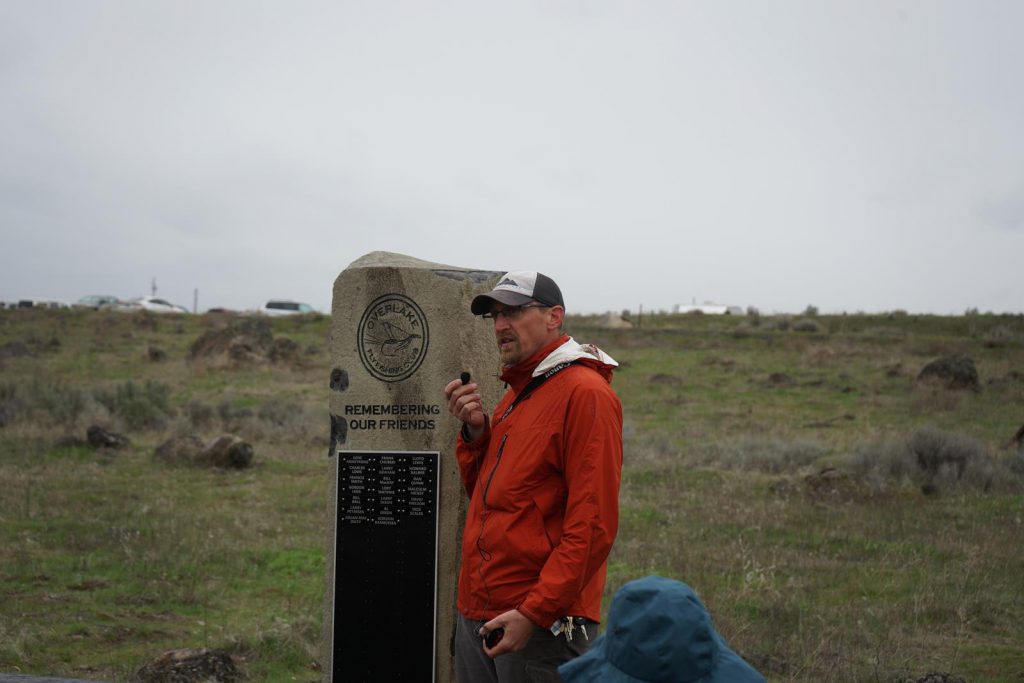 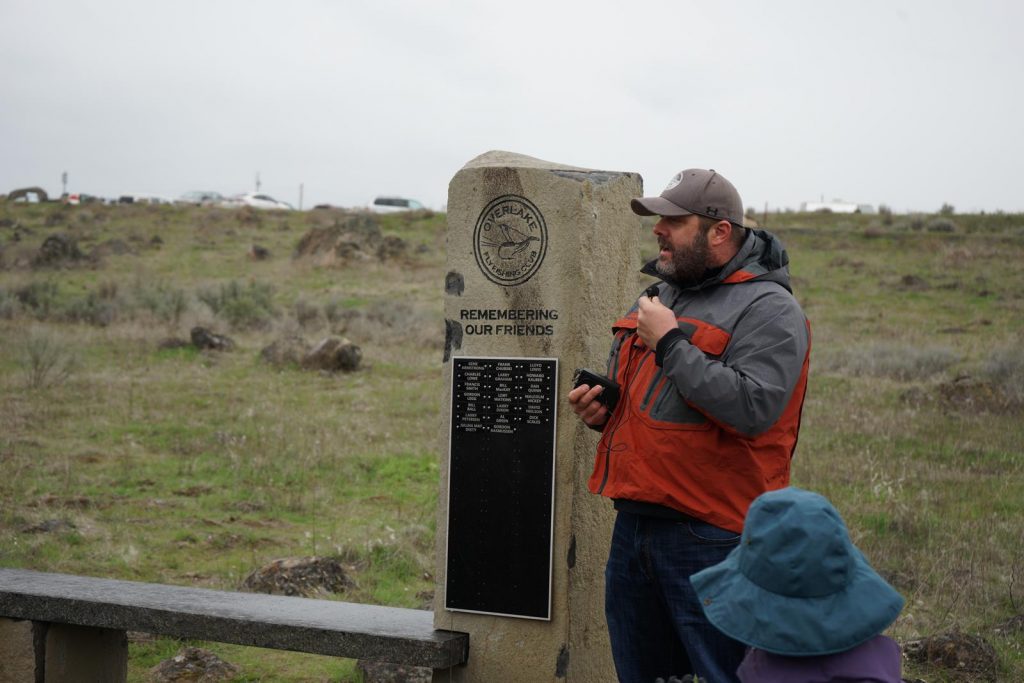 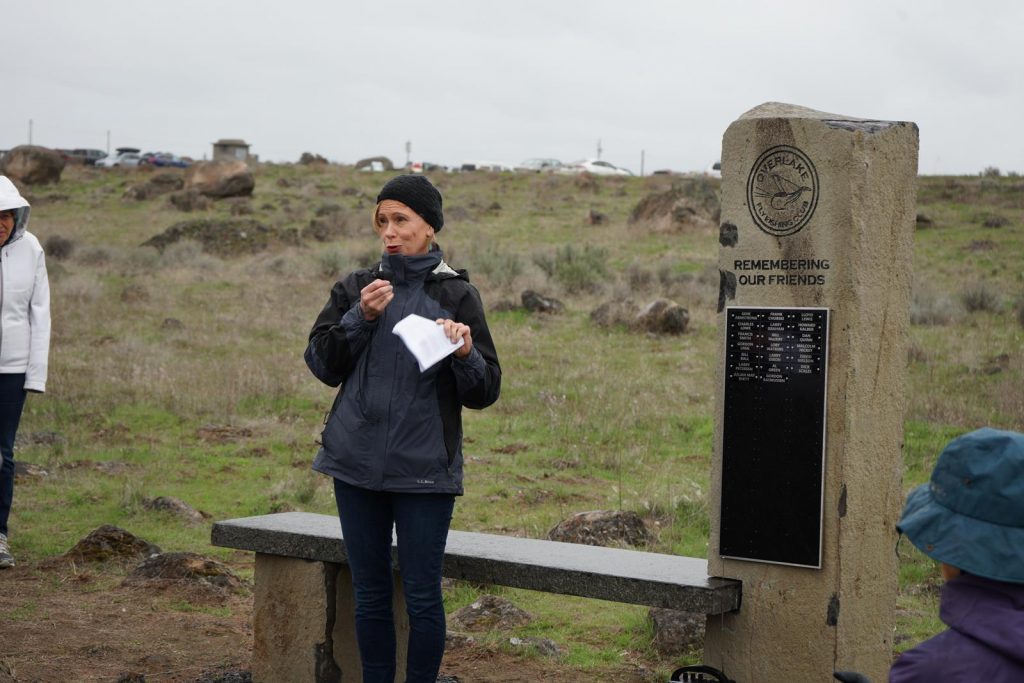 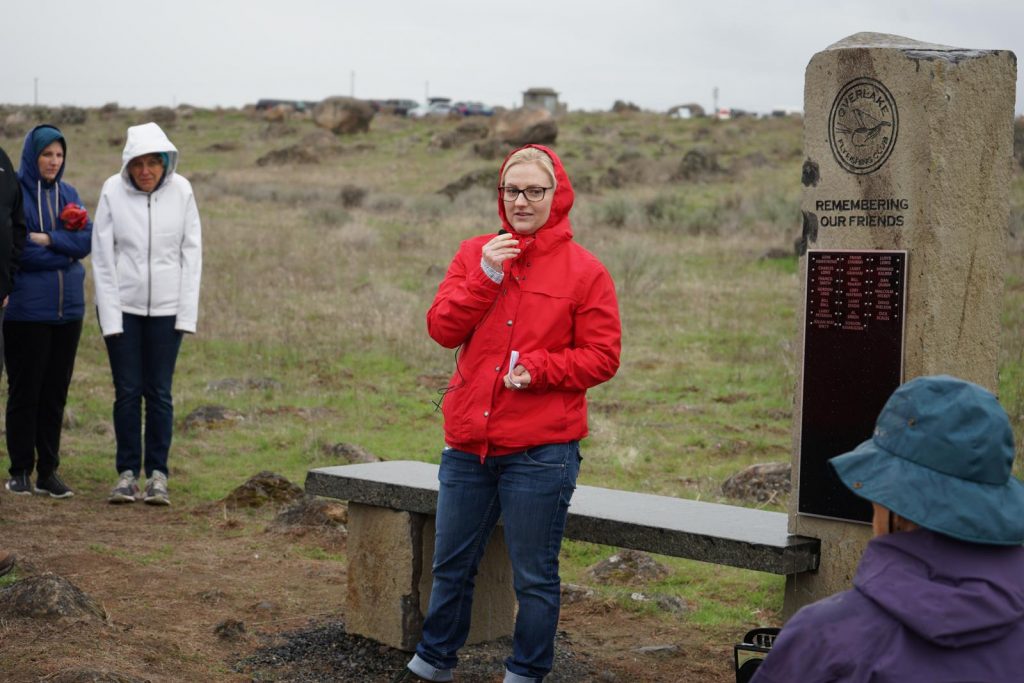 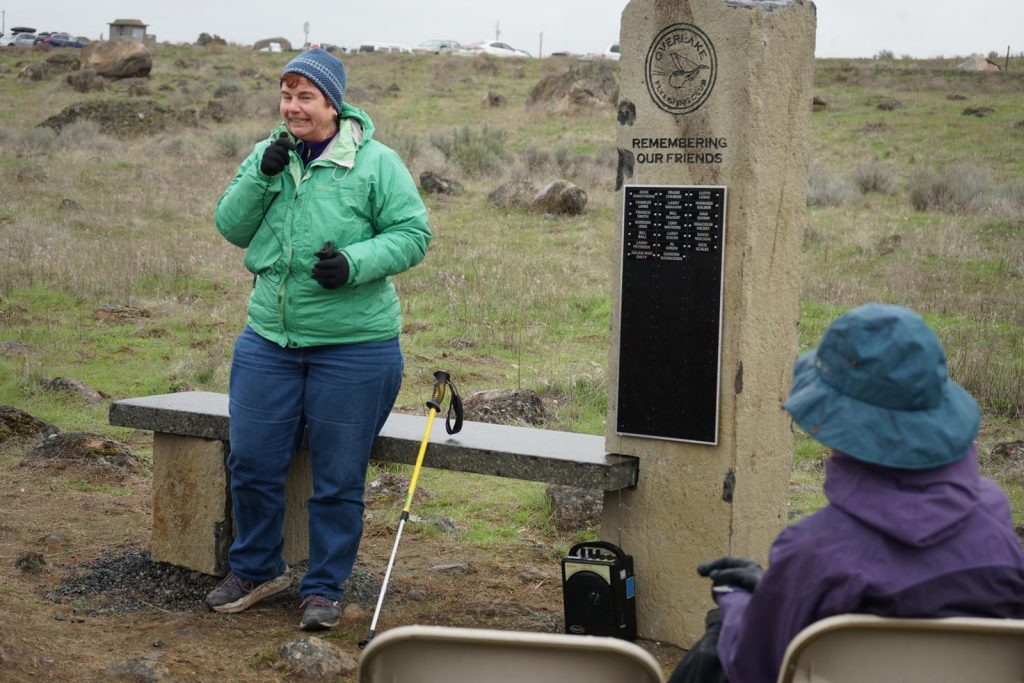 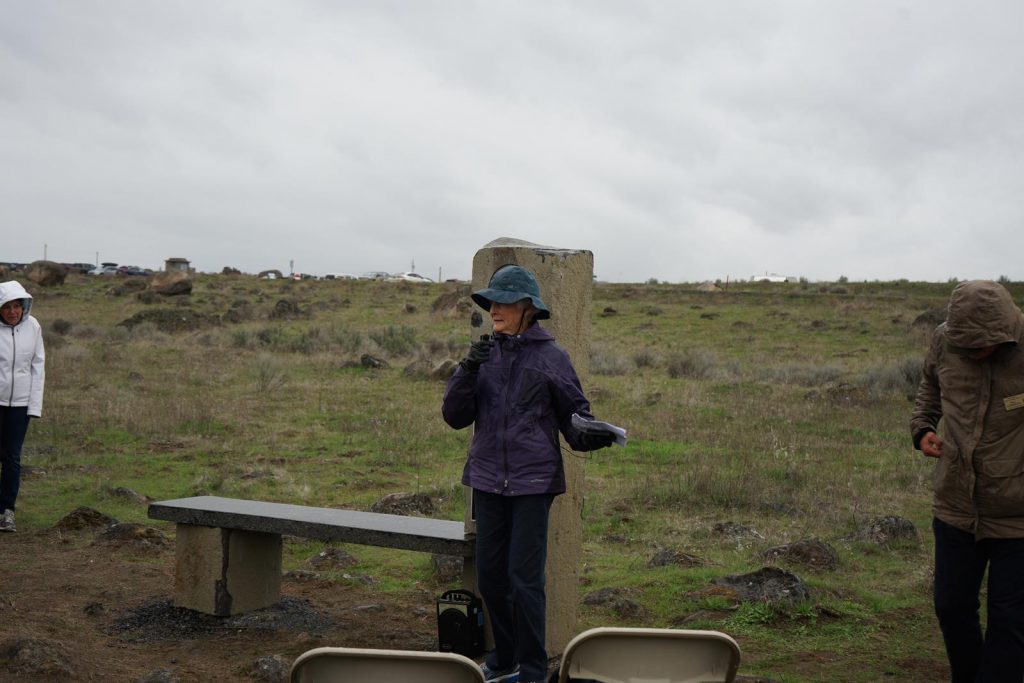 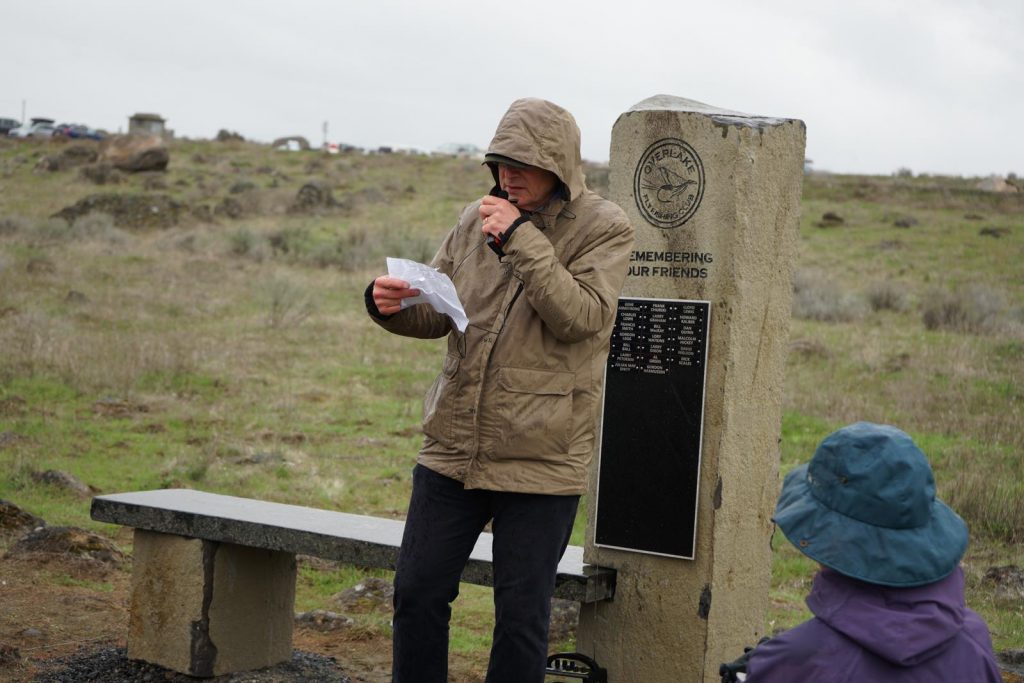 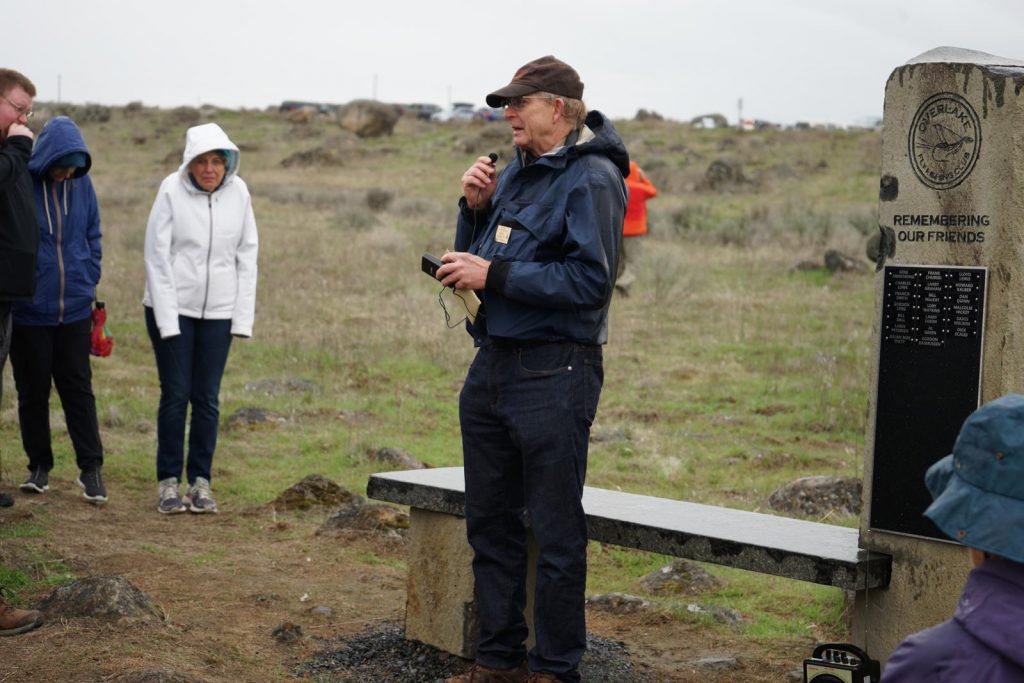 Kent Bassett, the “Father” of the Rocky Ford Memorial Bench 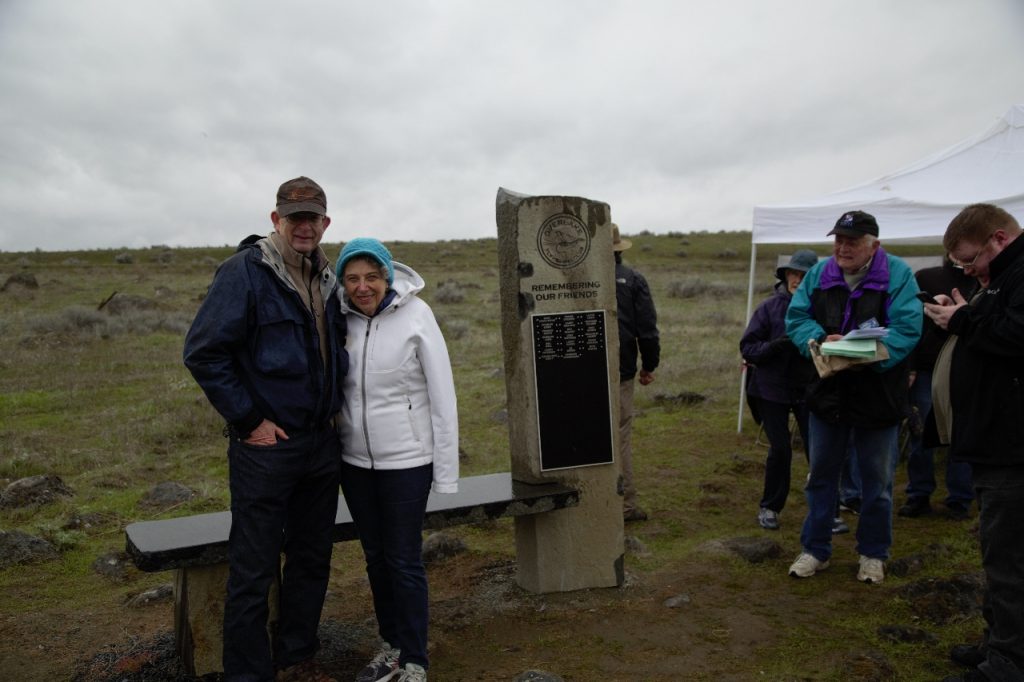 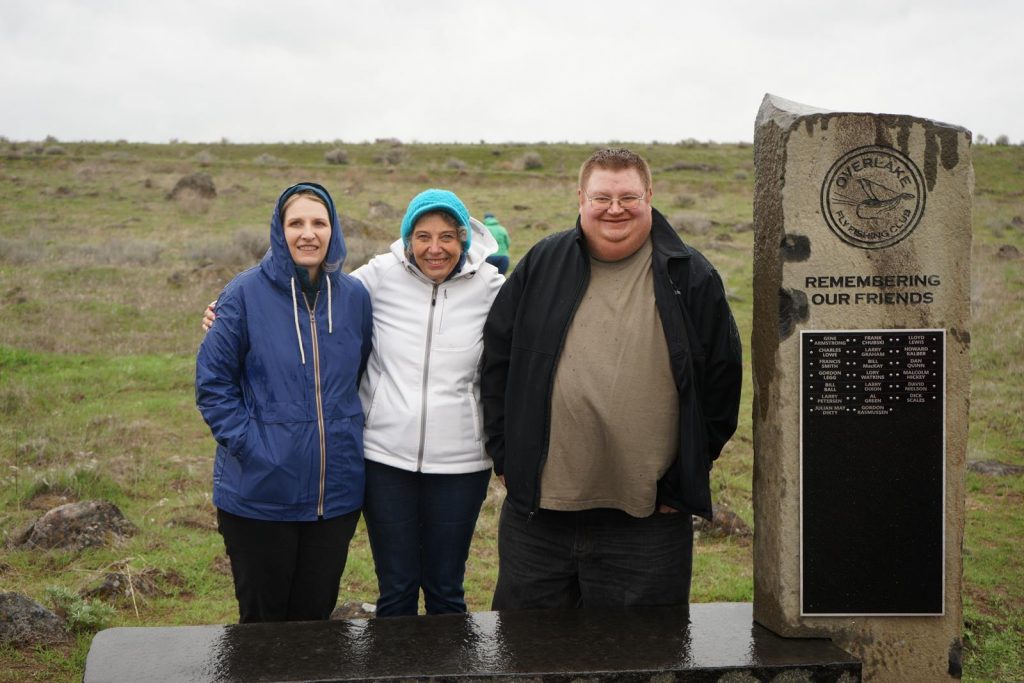 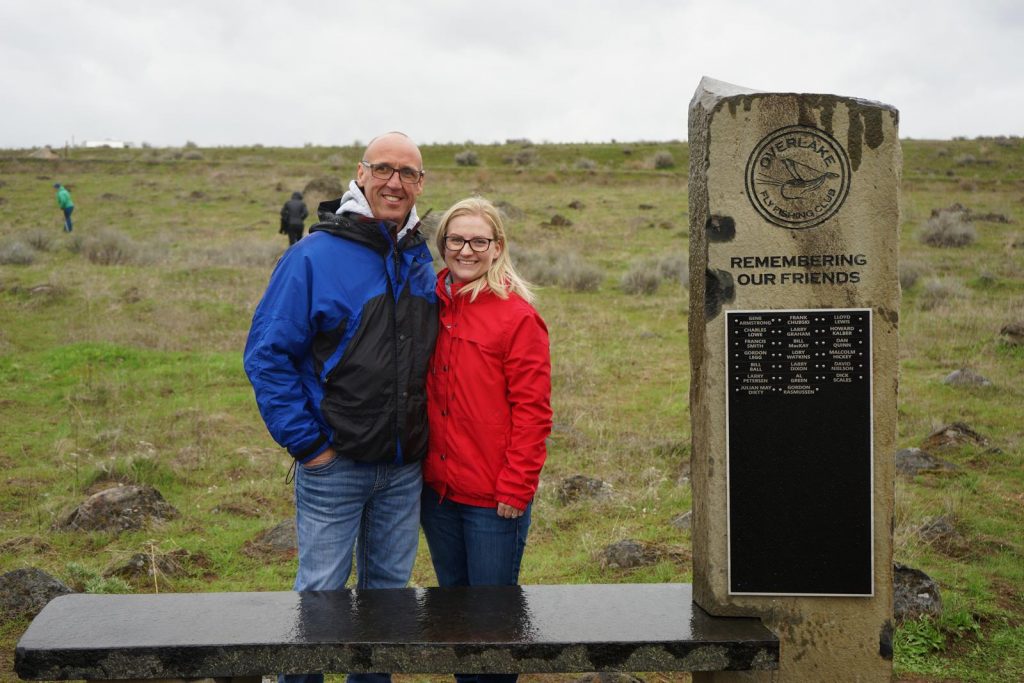 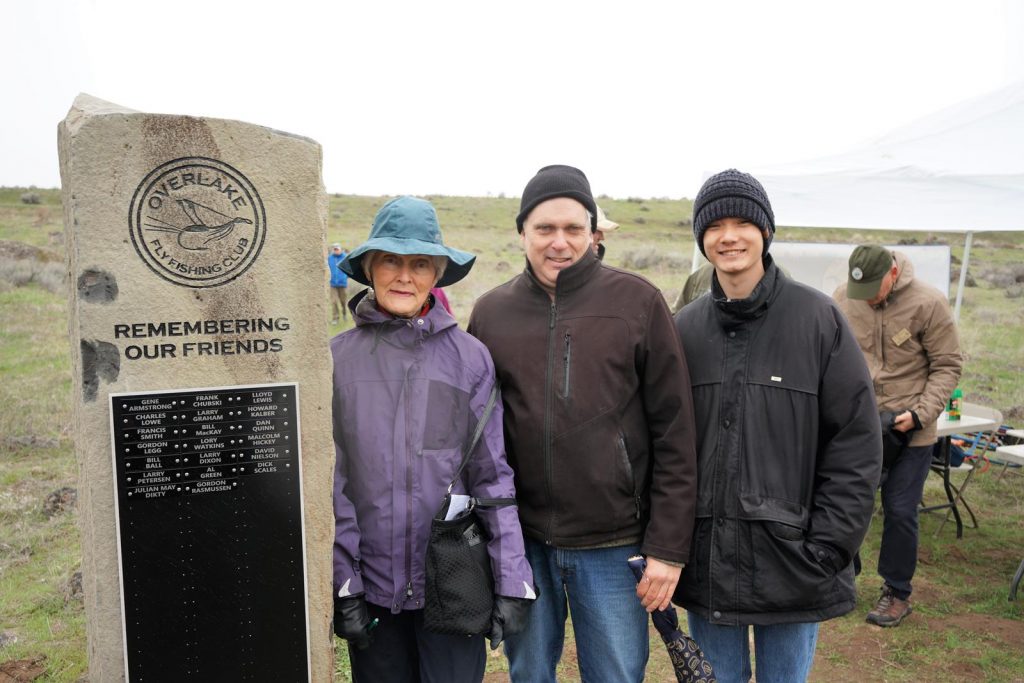 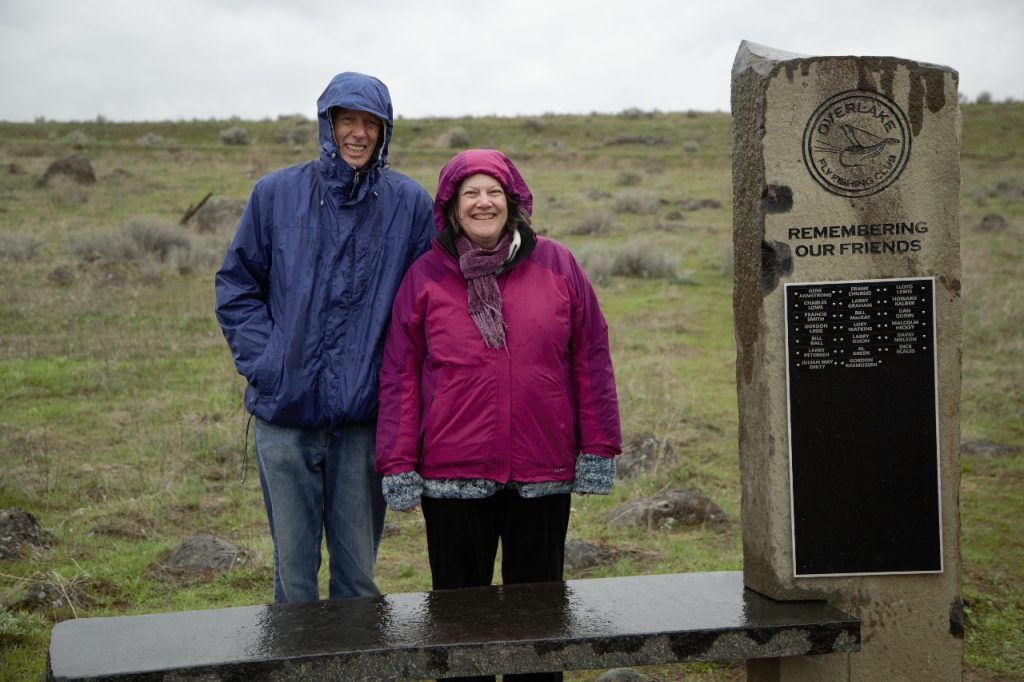 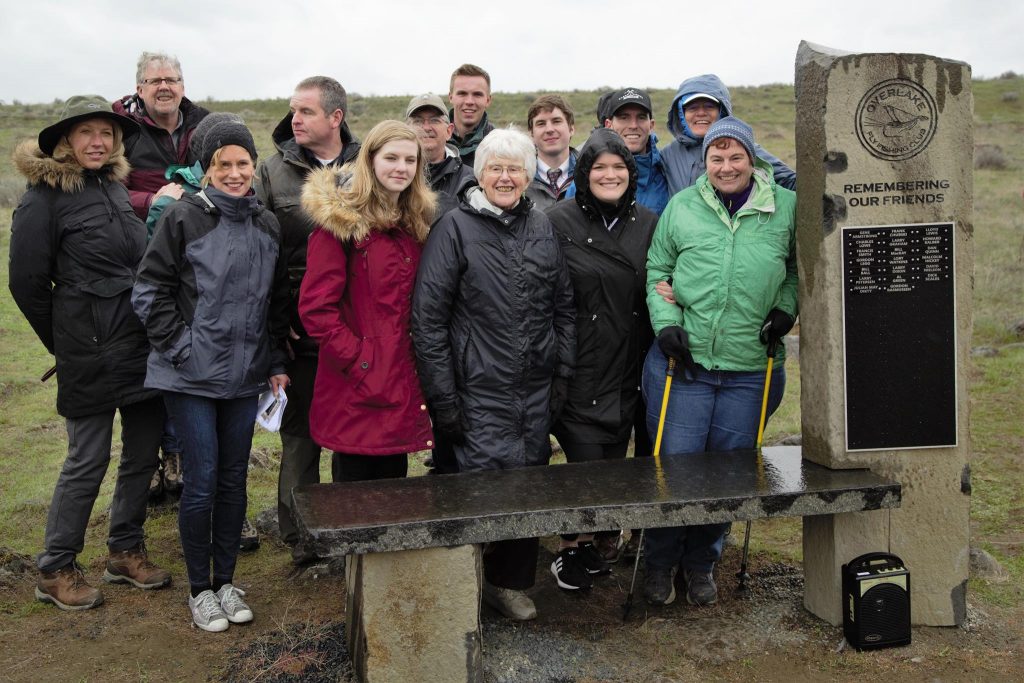 The Overlake Fly Fishing Club (OFFC) of Bellevue/Eastside Seattle, Washington, dedicated a Memorial Bench at Rocky Ford Creek in Grant County on Saturday, April 13, 2019, to honor past OFFC members who have made substantial contributions to the club. The Memorial Bench is intended to be a living legacy that generations of OFFC members and other fly fishers can enjoy and to encourage and inspire present and future club members to build on the tradition of service to the club and the fly fishing community.

Gene Armstrong (1910-1990):  Gene was an active member of OFFC until his untimely passing in 1990.  He served OFFC as a Trustee, Education Committee Chair, 3rd Vice President-Conservation, and Treasurer.  Gene was a well-known conservationist and fly tier and was known for his dragonfly nymph, damselfly, and other fly patterns.  He received OFFC’s Outstanding Lifetime Service Award in 1985. In 1989, he led a group of OFFC members who built the wooden footbridge at the upper end of Rocky Ford Creek, which remained in service for over 20 years.  After Gene’s passing, the club erected a plaque in his memory next to the bridge, dedicating it as the Gene Armstrong Memorial Bridge, and club members spread his ashes in the creek.

Bill Ball (1929-2015):  Bill and his wife Madeleine were active members in OFFC for many years.  Bill served briefly on the OFFC Board, was an active fly tier, and contributed many flies to OFFC raffles.  Bill passed in 2015 and is fondly remembered by many club members.  Madeleine still lives in Issaquah.  In the fall of 2018, Madeleine generously donated to OFFC Bill’s extensive collection of fly fishing gear, flies, and fly tying equipment, which has greatly benefited the club’s Raffle, Education, Chubski Fly Tiers Roundtable, Holiday Party Auction, and Youth Fly Fishing Outreach programs.

Frank Chubski (1923-1989):  Frank was a founding member of OFFC and its monthly fly-tying roundtable.  Frank also served OFFC as Education Committee Chair, Membership Vice President, and President.  Sadly, Frank passed away in 1989 before he could complete his term of office as President.  The following year, OFFC renamed the monthly fly tying roundtable that Frank helped found the Frank Chubski Fly Tiers Roundtable in his memory.  The Chubski Roundtable continues to flourish as an integral part of OFFC.

Julian May Dikty (1931-2017):  Julian was the author of numerous science fiction, nonfiction, fantasy, horror, and children’s books, mostly published under the name Julian May.  She was an active fly fisher and outdoors enthusiast throughout her life and briefly a member of OFFC, preferring to fish alone.  Shortly before her passing, Julian generously donated to OFFC her extensive collection of flies, fly-fishing equipment, and fishing books, from which the club has benefited significantly.

Larry Graham (d. 2002):  Larry Graham was a master fly fisher, guide, and fly tier who developed the popular Lightning Bug fly pattern and many others.  He was an active member and leader of OFFC’s monthly fly tying roundtable for many years and also served OFFC as Vice President and Trustee He received OFFC’s Outstanding Lifetime Service Award in 1991.

Al Green (1924-2016):  Al was an avid fly fisher who served OFFC as President, Trustee, Conservation Chair, and Warm Water Committee Chair in 1984-1989 before relocating to Winthrop, where he helped found the Methow Valley Fly Fishers.

Howard Kalber (1920-2003):  Howard was an accomplished fly fisher, fly tier, and rod builder who was actively involved as a member of OFFC and its fly tying roundtable for many years.  He served as President of OFFC in 1986 and also as Vice President, Trustee, Raffle Committee Chair, Auction Committee Chair, and Sportsman’s Show Committee Chair.  Howard represented a number of fly fishing gear manufacturers and vendors for many years.  As a result of his relationships with these companies, he was able to obtain fly fishing gear at bargain prices to benefit OFFC’s Raffle, Education, Holiday Party Auction, and other programs.  Howard received OFFC’s Outstanding Lifetime Service Award in both 1987 and 1988.  He led some unforgettable outings to superb fishing spots like the Babine River in Central British Columbia and the Bow River in Alberta.

Gordon Legg (1943-2010):  Gordon was a founding member of OFFC and very active in the early years of the club.  He served OFFC as President in 1978 and also as Treasurer for two years.  He received OFFC’s Outstanding Lifetime Service Award in 1979.

Lloyd Lewis:  Lloyd was a founding member of OFFC and remained active in the club for many years.  He served as OFFC’s President in 1975 and 1982 and also served as Vice President, Trustee, Treasurer, Ghillie, and Picnic Chair. He was the first recipient of OFFC’s Outstanding Lifetime Service Award in 1978 (with Lory Watkins) and also received that award in 1981.

Charles Lowe: Charlie Lowe was an active member of OFFC for many years, having served as OFFC’s Treasurer for nine years (1981-1989).  He received OFFC’s Outstanding Lifetime Service Award in 1986.

Bill Mackay (1923-2008):  Bill Mackay had previously served as President of the Puget Sound Fly Anglers before joining OFFC in the mid-1990s.  He soon made a huge impact on OFFC and remained a driving force in the club and in the fly fishing community until his passing in 2008.  Bill served OFFC as Membership Vice President in 1997, President in 1998, Trustee, and finally Conservation Chair for eight years.  He was passionate about fly fishing, conservation, and ecology and was an active participant in FFF (now FFI) and numerous conservation organizations.  Bill received OFFC’s Outstanding Lifetime Service Award in 2003.  In 2006, He became the first recipient of what is now known as the Bill Mackay Hall of Fame Award, which honors a member’s lifetime contributions to OFFC as well as to the fly fishing community.

David Nielson (1943-2015): Dave Nielson was a skilled fly fisher who mentored numerous OFFC members during his long tenure in the club and is fondly remembered by many.  He served as OFFC President in 1988 and also served the club as Membership Vice President and Trustee. David received OFFC’s Outstanding Lifetime Service Award in 2014 (with Cliff Barker).

Larry Petersen (d. 2016, age 74):  Larry was an active member of OFFC for many years, leading and participating in numerous club outings.  He later relocated to Port Ludlow, Washington, on the Olympic Peninsula.  Larry passed away in 2016 and is fondly remembered by many.

Dan Quinn (d. 2010):  Dan and his wife Marilyn were active members of OFFC in the early years of the club.  Dan served OFFC as President in 1979 and also served the club as Vice President, Trustee, and Windknots Editor (for several years).  Dan received OFFC’s Outstanding Lifetime Service Award in 1980 and in 1982 (with Marilyn Quinn).  Dan and Marilyn later relocated to Sequim, Washington.

Gordon Rasmussen (1923-2017):  Gordon was an avid fly fisher, conservationist, and fly tier who was an active member of OFFC for many years.  He served OFFC as President in 1985, the year the club was incorporated as a nonprofit corporation, and also served as Vice President, Trustee, and Historian (for many years).  After his passing, Gordon’s family and friends generously contributed over $1,000 to OFFC in his memory to be used toward the purchase and acquisition of the Rocky Ford Memorial Bench to honor Gordon and other former OFFC members who have made substantial contributions to the club.

Francis Smith (d. 2006, age 73):  Francis was an OFFC member for many years who served as OFFC Programs Vice President, Trustee, and Membership Vice President before stepping in to complete Frank Chubski’s term as President in 1989.

Lory Watkins (1941-2013):  Lory Watkins was a founding member of OFFC who became an OFFC institution for nearly 40 years until his passing in 2013.  Lory was a skilled fly fisher, fly tier, and conservationist.  He served OFFC as President in 1976 and in many other capacities including Secretary, FFF Committee Chair, and Windknots Editor and Historian for many years.  He was the first recipient of OFFC’s Outstanding Lifetime Service Award in 1978 (with Lloyd Lewis) and received the Bill Mackay Hall of Fame Award in 2007.  After Lory’s passing, his wife Linda generously donated Lory’s extensive collection of his own hand-tied flies and other fly fishing equipment to OFFC to benefit its programs and activities.