The OFFC received pictures of a fish kill at Lone Lake.  After forwarding to the WA Dept of Fish and Wildlife we received a detailed answer… lack of dissolved oxygen but not due to temperatures. 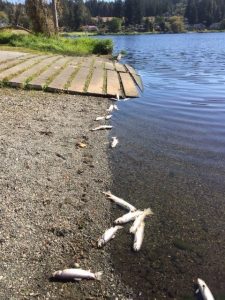 I was able to investigate the fish kill at Lone Lake with WDFW’s Officer Downes and Zack Gaston from the Dept. of Ecology yesterday afternoon.  We visually surveyed about 30% of the lake shoreline to determine species and approximate sizes that have died, measured water temperatures and dissolved oxygen concentration, and looked for signs of chemical contamination.

We only observed Rainbow Trout ranging from 12 to 18 inches long and estimate that more than 1,000 fish were visible along the shoreline, but did not seek to formally estimate the number of fish that have died.

Water temperature did not vary more than one degree and averaged 65˚F, which is below the lethal threshold for Rainbow Trout (77˚F).  Dissolved oxygen declined from 1.8 at the surface to 0.6 mg/L at the bottom (average = 1.3 mg/L), which is well below the lethal level for Rainbows of 3 mg/L and the likely cause of the kill.  Rainbows are pretty hardy and are capable of avoiding too much exposure to either lethal condition if they can find temporary refuge.  Unfortunately, there aren’t many options for avoidance in small and shallow lakes like Lone.

We did not think that contaminants are a likely cause of the kill because only Rainbow Trout were observed.  We also spoke with an angler who reported catching several Largemouth Bass in recent weeks, but no trout.  The survival of one species, but not another corroborates our conclusion that the cause is most likely environmental.

There isn’t much else we can do at this point to determine the impact to the population, but wait and see how fishing is this fall and winter.

Please don’t hesitate to report observations of additional mortality and/or fishing success as that information is invaluable to WDFW’s efforts to maintain the fishery.