Have planned trip to Batstone Lake near Corbett; also a private lake with paid access; question for my group is do we need CA fishing licenses to fish on a private lake? Presume the answer would be the same for Corbett as it is private.

Beautiful day at the ‘snake today. I was second one on the lake this morning at 8:45 and motored my way out to 50′ of water watching the fish finder. There is no shortage of fish…. maybe too many as they are not growing much. Best fly continues to be the micro red leech, Brian Chan style tie fished vertically. Fish were hooked between 45 and 15 feet, majority at 25 to 30’. One at 14″ the rest 10″ to 13″. One sucker, of course the largest fish of the day!!! No other fly anglers, only the one troller . Osprey had a good day, and by the time it got warm and I left, parking lot was full and the inflatable crowd was large. Great well used park.
Tight lines, Ron

Had a fun day at Leech with Joe Coakley and Kyler Ries on Friday July 9th. Leech was its usual self. The chosen few regulars were doing well, and it was very site specific. Along the north shore tight to the logs, the far end chironomid hole, and south east shore. The ‘bows were schooled up, or hiding under logs. Very little surface activity but damsels everywhere. No nymphs however. I got a few under the indicator on a #16 brown mid, and red micro leech. But most came on the Rickards callibaetis #14 gray. Classic 15″ strip and pause. Cast next to logs, to the edge of the reeds, and over the darker, deeper part of the lake when the breeze created a covering ripple. Time of day didn’t matter. Clear, calm, warm. That kept the ‘betis in check. A dozen fish, five bows, all right around 19″, brookies 6 to 13″.
Tight lines, Ron 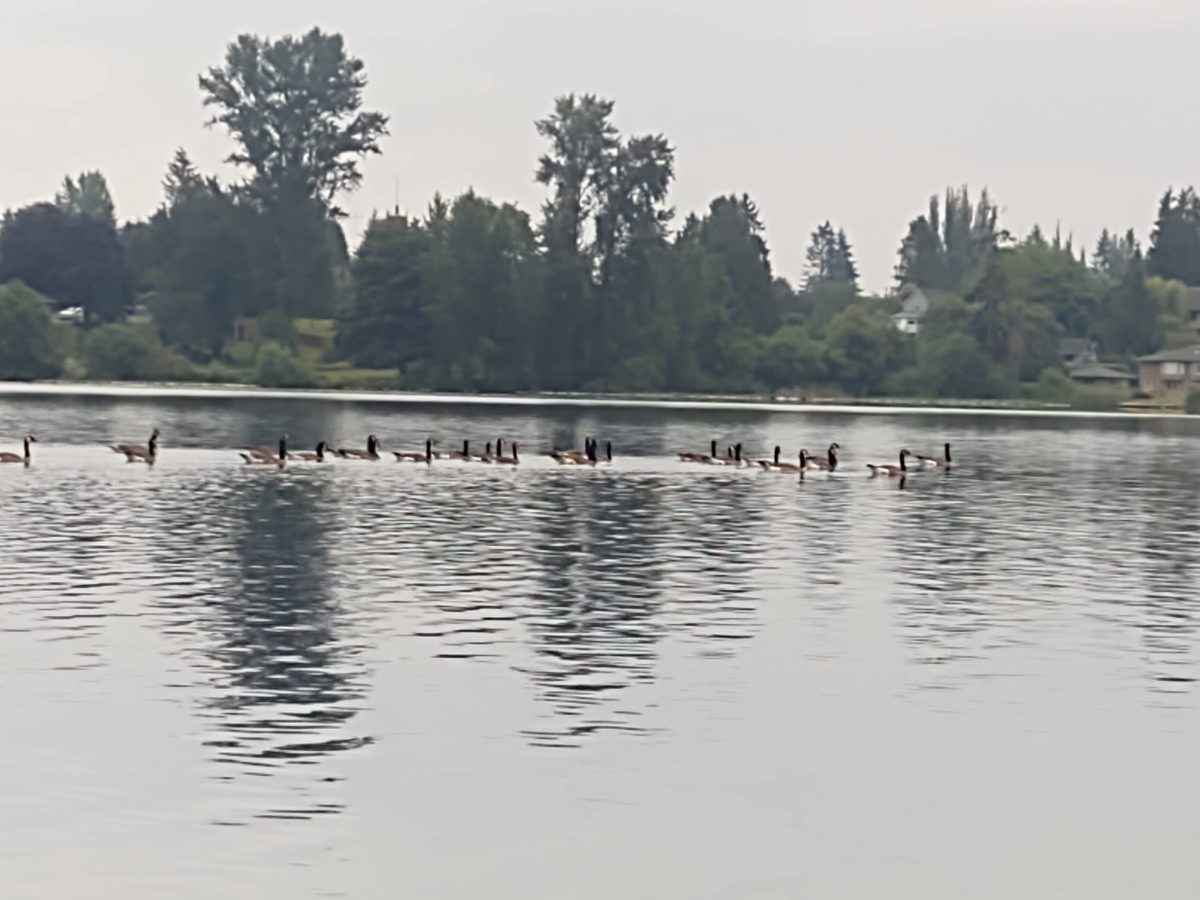 I visited Blackman’s Lake on Monday and was searching for bass. I am totally new to bass fishing and am inspired by the huge fish I see fellow club member Francis Huynh and his brothers catch at random. The water temperature was in the high 70’s and felt like bathwater. All of the fish on my Garmin 4 Fish Finder were stacked at the opposite side of the lake to the left side (facing the water from the launch). I got one tug and that was it. I even switched to trout gear on my second rod and the Olive Willy got the tug. BTW: the 2020 article written in Windknots is my new guide for searching new bass waters. (Great job to our great editor Dick Lange! ) I worked the docks to the left side of the launch then the lily pads, only busting off one fly. Question for any bass gurus’ out there: when do you decide to use a popper vs. a surface fly and how do you select the fly you decide to fish? I have scoured the wonderful book written by past OFFC Guest Speaker David Paul Williams and the patterns appear to be endless in choices. Any help would be much appreciated as I have no idea how many of you Bass Masters may be hiding in the lilies. 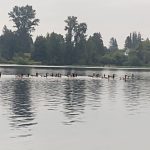 On Tuesday June 8 six of us met at Rattlesnake to explore the concept of vertical/dabbling for trout. We had a fine day with light winds, just a brief rain shower, and lots of fish in the lake. This is something I have been trying out for several years, and while I do see some of the ‘snake regulars really knock them out, I do get my share and attempted to share that knowledge with David, Bob, Bruce, Kevin and Terry.
We met about 8:30 and were on the water and searching for fish. Found them with Garmin Striker 4 CV in 46′ and anchored up. Used a Type 7, measured depth using forceps, and then cast and let line go vertical, so flies just off the bottom. I used my usual initial Rattlesnake searching patterns, a blood worm below a grey boy snow cone, both #14. Let them sit on the bottom, then inched them up very slowly. After about a half hour of nada, someone turned the switch on it was basically nonstop action for two plus hours. Game on! I never really had to switch patterns which is unusual. Keep working those flies up, as some takes were at 10’. Others watched, and followed technique and got into fish with balanced leeches (red, white and black), blobs, and a few other flies. The anchoring and keeping the fly stationary with very slow upward movement was key to takes, which were often VERY subtle, and sometimes rather violent; the tug is the drug…. I would guess I had at least 40 to 50+ takes and managed to set on enough to keep it interesting. Trout ran up to 16″ most 10 to 11″, and one sucker at 17″. Answered questions as they came in and encouraged all to keep at it as it is a learning curve. Sometimes that paint just doesn’t seem to dry….
Some eventually switched to trolling which also produced fish. And one other small highlight, a pair of eagles stole a trout from an osprey, fun to watch the aerial battle.
Tight lines, Ron 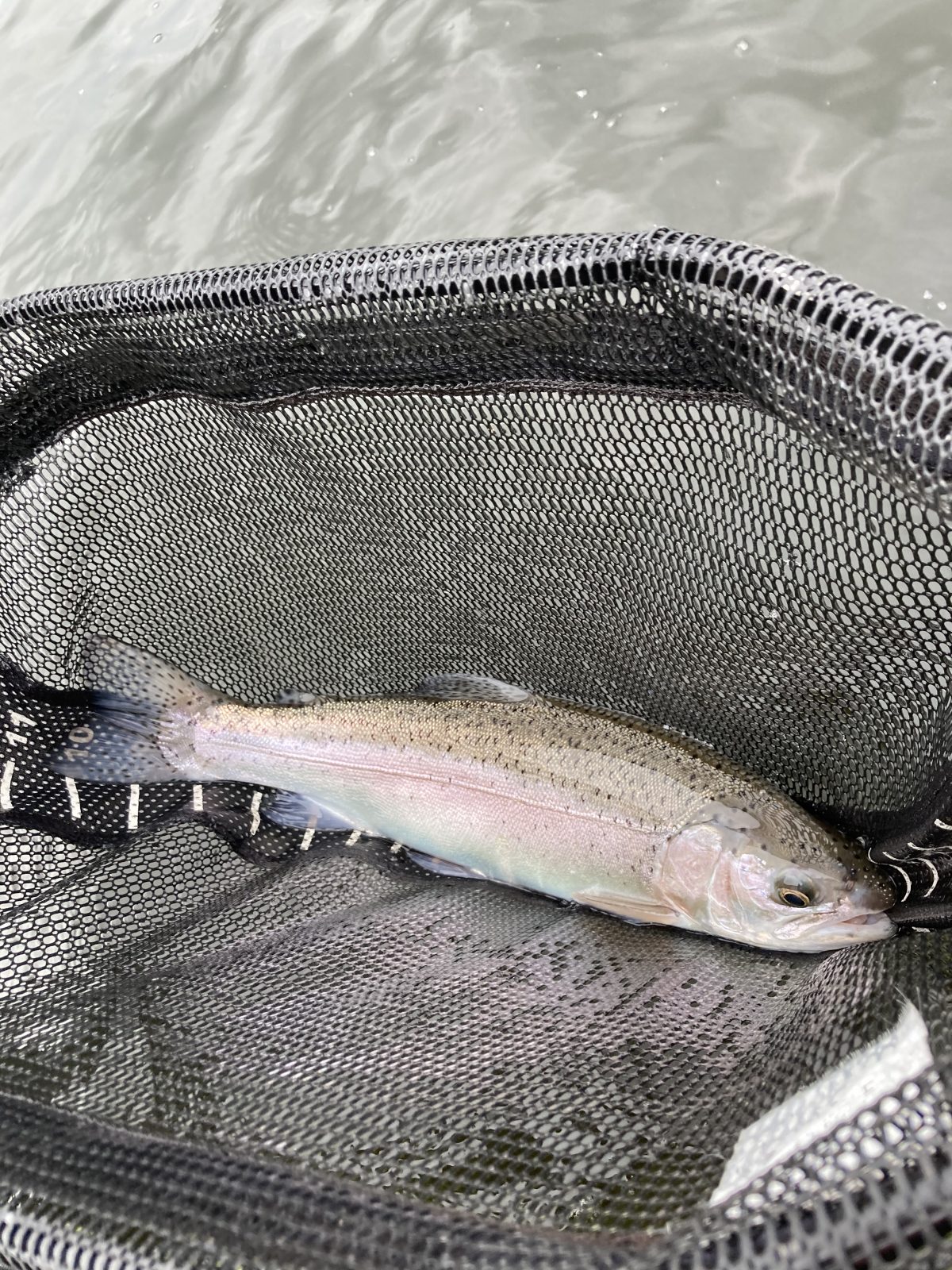 I fished Lone lake on Thursday. It started out slow. Around mid-morning the bite started to pickup using chironomids under an indicator. A lot of take downs and missed fish. I did landed a half dozen fish or so with a mixture of recent plants and holdovers. The best fly for me was a blood worm tied with red beads. The best fish (pictured) was a fat 17 inches. Unfortunately I lost that fly to a break off around noon. I had a similar fly but much bigger. It worked but not as well.

There was one guy there I didn’t know who was just slaying them. He was fishing two rods. (I haven’t figured out how to mange two rod with indicators. I’m always holding the wrong rod ). He had at least four doubles. He also pulled in a lot of foul hooked hooked fish which he announced to his buddies. Judging by the comments to his buddies, he was using a size 14 black chironomid with a dark bead and a red thread head. 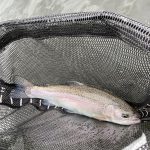 Looking for something a bit different and also curious about another “quality” lake, so headed to Martha Lake, Warm Beach. Was joined by George Hu. Good public launch on north end, lake is a bit of a tea cup with 70′ at deepest. Good edge areas at 8′ to 15′ on northwest corner, along north side, and a nice “wild” pocket on the south east edge. Nice day, a bit of wind. Lake is two fish over 14″ and open all year. We found fair number of willing stockers from this year, but few of the holdovers. Got a few up to 16″. Lake is heavily fished by the catch and keep folks mostly trolling up and down the deeper middle. We found some chironomid and blob action in the shallower areas and a black bead head bunny leech produced hits all over the lake.
Ron 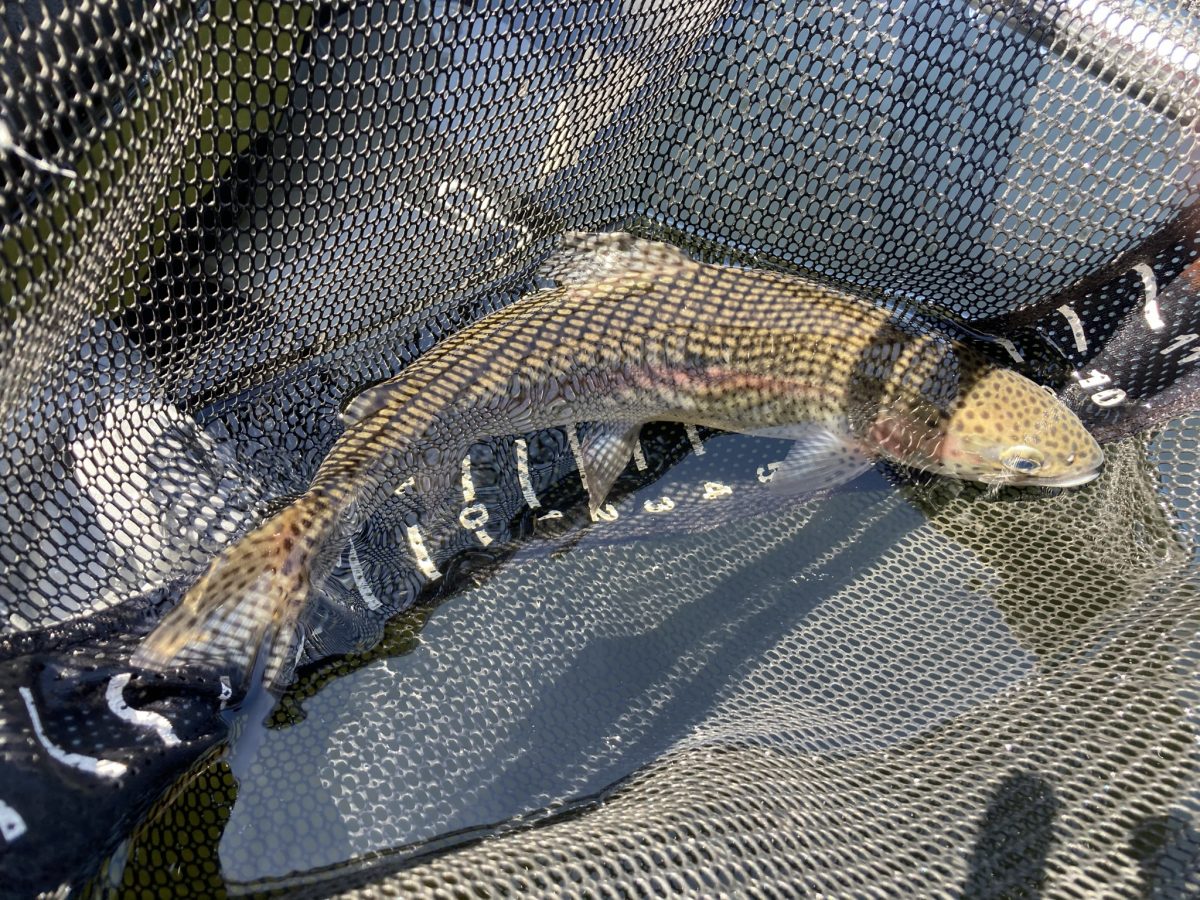 Picture of one of the holdovers we caught on Tuesday. 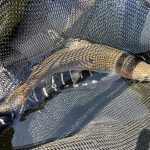 I fished Chain Lake today from 11 – 3 and ran into Paul St Pierre. Another fisherman said it had fished well on the weekend but today it was slow. It was slow but actually pretty steady and I think we both had a half dozen. None of mine were under 13″ and one nice 16″. A WDFW truck showed up and stocked the lake but when I went to inspect they looked pretty small so I stuck with what was working for me – trolling olive & black hale bopp slowly. One fish I pumped showed daphnia which explained the slow day. But overall fishing was decent and it was nice to catch bigger fish. As I was leaving 3 teens were putting in and I saw a container of worms so I asked them and one said “we’re fishing worms” and then when I told them no bait was allowed they quickly said “we’re using spinners” 😉

Fished Cottage Lake from about 11-1. I got a report from a dock fisherman that it was slow, but I found fishing to be good and landed a dozen with lots of nibbles. The fish were mainly in front of the docks. Trolling was most effective. Didn’t have any bites stripping. Had about equal action on a sinking line with chartreuse willy and an intermediate with olive bugger (which I just tied at the fly tying class this week!) As with Pine, about half were about 10″ and half 12″.