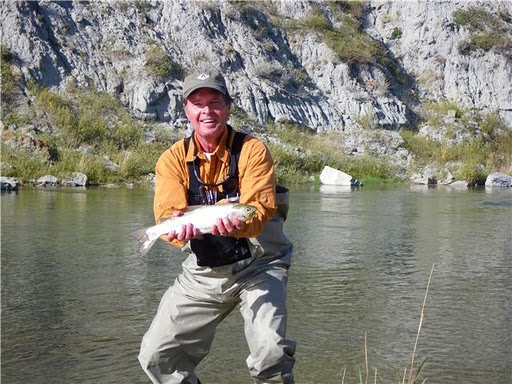 The day began with great anticipation. Don, my fishing buddy, and I had just purchased a drift boat to fish for steelhead. With no experience whatever, we just assumed that we could learn on the river. We launched on the upper section of an Olympic Peninsula river with no difficulty and gained confidence with each passing minute. Don was on the oars for the first drift. It was after I took the oars that the fun began. We entered a section of the river which was narrow and shallow. As we gained speed, I extended the sawyer oars straight out from the boat in an attempt to slow us down. The loud sound of the blade on the right oar breaking into two pieces was the first sign that things were not going well. The boat quickly started to spin in circles as we were out of control. After we reached calm waters, Don stated the obvious “ You don’t know what you are doing, let me take over” No argument from me. With Don at the oars, we approached another narrow and shallow section. This time, it was the left blade that broke into two pieces. That was just the beginning. The anchor rope became loose and the anchor dropped behind a large boulder in the middle of the river. The boat was now swinging violently back and forth in the white water. We looked at each other for a solution to our predicament. That was a waste of time. As we were swinging close to the river bank, I noticed the water was clear and seemed only two or three feet deep. I suggested that we try to get the boat close to the bank and I would jump in and then walk the boat upstream to loosen the rope and dislodge the anchor. Water depth can be deceiving. I jumped in and was completely submerged in eight feet of water. March on the Olympic Peninsula is not exactly prime time to take a swim. The fun was not over. We tried to hike out but heavy thick mud blocked our escape. Just when things seemed hopeless, another boat with two guys showed up and loaned up an extra oar. Drained of energy, we loaded the boat and headed for the first take out we could find. We now realize how fortunate we were as that first day on the water quickly taught us to respect the power and force of rivers.

See you on the water.