Larry Elhart, George Hu, Howard Levens, Ray Kanemori, and Richard Pierson (guest) took a trip Oct 10-15th to La Paz, Mexico.  Ray Kanemori discovered “Pirates of La Paz” at the fly fishing show last year and signed up for an incredible deal of 5 days, 4 nights, 3 days fishing for $900/ppdo including boats, rods, and 2 meals per day.  Airfare can be as little as $550.  Richard is the head Fly fishing guide who helped tremendously in this unfamiliar water, is $200/day.

We were targeting dorado (mahi mahi) and roosterfish, and we found plenty of both.  We had 2 fishermen to a 21’ boat with a captain.  They first look for sea birds, then troll bait & flies, and look for Dorado leaping out of the water.  The usual scenario was to hook a dorado on the baitfish or trolled flies, then bring that fish close to the boat and other dorado follow and soon there’s a few circling around the boat.  You have to cast flies to them which is challenging because these dorado are extremely quick, always turning, you’re casting in all directions, and they don’t stay around long.  We successfully hooked up with the dorado casting in this frenzy, but it wasn’t easy, and was exhausting with a 12 weight.  More dorado were caught by trolling, and catching and keeping the limit of 2 per person wasn’t hard.  We probably caught and released dozens as a group.  The largest one of our group was probably 15 pounds, but we saw a monster 30 pounder landed by another group.  Pirates of La Paz will vacuum pack and freeze your fish for you for free.

While trolling flies, we frequently hooked up with Bonito, which is very similar to Skipjack Tuna.  These fish are generally football-sized, but they are solid muscle and were some of the best fighters even compared to much bigger dorado.  Hooking two at once was common.  George landed one monster that was probably 10 pounds.  Our most interesting stories involved what happened while trying to land bonito.  Ray brought one up that was foul hooked and shredded – most likely by a wahoo, and Howard witnessed one of these toothed torpedos chasing his.  George brought one to the surface and saw the huge thin dorsal of a sailfish trying to make a meal of it, while Howard saw his captain bring one up followed by a billfish that presented itself like a periscope rising up out of the waters.

One of the most unusual fish was the Roosterfish, with a rooster-like dorsal fin.  They inhabit waters close to shore and we fished for them by boat.  Catching Roosterfish was a similar process to the dorado with baitfish attracting them to the boat and then casting to them.  They are very fast and put up a good fight.  We also caught numerous shore-dwelling species during this process including a lot of needlefish, trumpetfish, and what the local captain called a “bonefish”.   It’s similar to the bonefish in color and ability to run, but unfortunately after comparing photos we realized this was actually a “ladyfish” but known by both names.  Some in the group also got to go ashore among mangroves and cast for fish.  They spotted snook among the mangroves but they were too elusive to hook.

The area is also popular with Marlin fishermen trolling big feathered flies on big gear.  A 360 pound Marlin was caught by one of the Pirates captains while we were there.  Our fly fishing guide, Richard, has also caught them on a fly after attracting them close to the boat with hookless attractors.

To get to La Paz you fly into the Cabo San Lucas at the tip of the Baja peninsula.  La Paz is a 2 hr van ride but a world away because there are no resorts there, just locals.  The fanciest seafood meal with drinks and tips was less than $25 per person.  We felt very safe walking the streets at night and it has less crime than US cities of comparable size.  It’s long been popular with gear fishermen seeking a cheaper and better fishing alternative to Cabo.  It’s not yet a major fly-fishing destination, but if you want to try warm water big game fishing on a budget, La Paz is something to consider.

On April 20, I set out for San Jose, Costa Rica to meet up with seven other friends from the Seattle/Tacoma area to head out to Nicaragua for some tarpon fishing.  After a short flight from San Jose to San Juan de Nicaragua, we boarded boats for the 10 minute jaunt to the Rio Indio Lodge.  This lodge was built about 10 years ago and billed as an Ecotourism Lodge, but has since added the fishing aspect as this area at the mouth of the San Juan River is right on the migratory route for big tarpon.  The lodge was really beautiful and built right in the jungle.  We arrived on Sunday and were fishing by Sunday afternoon.  I was the only person fishing flies.  The gear guys were using jigs or bait (sardines) if available.  My partner hooked up and landed his first tarpon early Sunday afternoon.  At around 4:50pm, my Tibor Pacific reel attached to my 14 wt Orvis Helios2 started screaming and the fight was on. Once you get past the first jump (which happens almost immediately), you’re probably hooked up well.  After about 40 minutes, I landed my first tarpon – around 75 lbs.  I caught the fish on my own hand tied Black/Green/White Deceiver on a 6/0 hook using 25 lb class tippet with a 100 lb shock tippet.  Pretty exciting.  Throughout the rest of the week, I had 3 other hookups, but did not land another tarpon.  I did however, land a very nice Jack Crevalle, again on one of my Deceiver ties.  The guys using bait did better, but I refused to go over to the “dark side”.  While at Rio Indio, we also did a day of jungle fishing which was really fascinating.  The guide took us into the jungle through some nasty and shallow water (sometimes having to paddle) to get us to the area where we fished for Guapote or Rainbow Bass.  Lots of fun.  My partner and I caught over a dozen Guapote the largest weighing in at about 6 lbs.  I did very well using a Black Starlight Leech on my 6 wt Orvis Zero Gravity rod.  The last item of particular interest about Rio Indio is its resident crocodile.  The croc, named Juan Cho, has been coming to the lodge dock every evening since the lodge owners first started coming to the area in 1990.  They, of course, feed him.  The Discovery Channel did a special on the croc and he is 125 years old, 19’1” long, and weighs about 1250 lbs.  He just nonchalantly swam up to the boat dock into one of the slips every evening waiting for his fresh snack.  The picture attached shows Juan Cho dining on a Jack Crevalle.  Pretty spectacular sight.  We had a great time at Rio Indio Lodge.

Upon our return to San Jose, four of our group of eight remained to travel to Quepos, Costa Rica for some Sailfish fishing.  We flew to Quepos on April 26 and had Sunday, April 27 off to explore and chill in Quepos.  This is a nice, quaint seaside town and we learned that there were a lot of American expats living there.  The town itself had some really nice bars and eating establishments, but the high rent district was up the hill on the way to Manuel Antonio National Park, which is supposed to be pretty spectacular.  Anyway, our first day of fishing was Monday, April 29.  We boarded the “Sea Lady” captained by CPT Eric along with deckhand El Chita.  We proceeded about 25 miles offshore in search of Sailfish.  I had my 14 wt rod rigged up with a sailfish popper, ready to go, but with trolling eight bait rods with an additional 3 teasers, I didn’t have much of an opportunity to get to the sails with the fly.  I’m not proud, but I did enter the rotation for the fighting chair and landed 3 sails on gear.  I’m not including any pictures of the sails since they don’t count, being caught on gear.  I did however catch a few Yellowtails and small Dorado on the fly while we were fishing for Sailfish.  On the last day, we did some inshore fishing for Rooster fish.  I was using my 6 wt Zero Gravity casting on the bow of the boat.  It was pretty rough as we were right in the surf.  All of a sudden I saw a big fish right beside the boat.  I already had my fly out on that side and as it swung around, the fish saw it and developed some interest.  I stripped it in a few times and suddenly, FISH ON!  This was a pretty big fish for what felt like a really wimpy 6 wt rod.  But, about 45 minutes later with the help of CPT Eric helping in the chase, I landed a 35 lb Tripletail (kind of a black snapper).  Quite a fight on the 6 wt.  Deckhand El Chita indicated that these fish were really good eating and that he would be happy to take the fish, so this fellow was not released unscathed.  We continued on to another area by a bunch of big rocks to seek Roosters.  One of the gear guys landed one.  Beautiful fish – really hard fighters.  Since we were told Roosters would take nothing but live bait, I thought I would use the 6 wt rod with a “live sardine” fly.  Yes I know it’s cheating and I deserve a ration of $*%!, but what the hell.  I wanted to catch a Rooster.  Right at the end of the day, I did hookup and again, after a 45 minute battle, landed a 30+ lb Rooster fish.  The rod broke just as we had the fish up to the boat but we landed the fish anyway.  Catching the Yellowtail and the Rooster on the 6 wt. was quite a battle, but the rod was way overmatched.  I was quite impressed with the strength of the rod.

All in all, this was a really great trip.  I got to explore some new areas, catch some big saltwater gamefish on the fly, and have a lot of fun with a great bunch of guys. 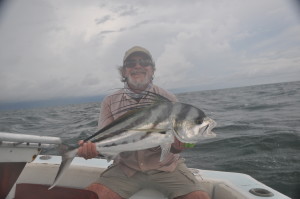 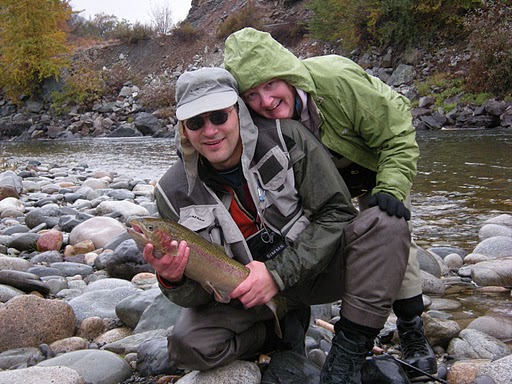