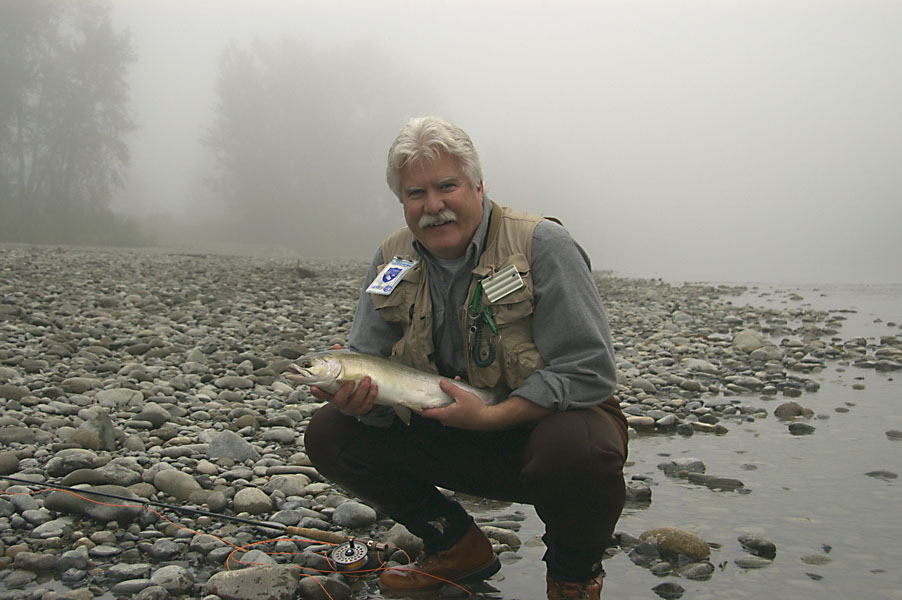 Finally picking up a few fish on a warm summer evening but it was starting to get dark.  Another cast along a nice seam and I felt a take, made a quick little strip to set the hook and my line comes flying past my ear.  I thought I had corn-rowed a little dink and turned downstream to bring him in for release.  As I turn there was a bat flying surprisingly close, about 20 feet away.  As I waded backwards he kept coming closer to me.  It seemed he was going after my 3 weight and I started swatting at him as he kept buzzing me. Why was this bat attacking me?  As I’m fencing with this guy he lands on the water next to me and I watch as he floats by.  Never saw a bat land on the water to get a drink, I’ll have to look that one up on the internet.  He floats harmlessly away and seemed to take off so I proceed to untangle the line I’ve got all over me from the swashbuckling.  I’m feeling down the leader towards my tippet, but it’s wrapped around my back.  I reached behind me and followed the tippet around to the front of my vest and thought the fly must be pinned on my vest somewhere.

As I felt along towards the fly and pulled the tippet away, I peeled the bat I thought had flown away from my vest pocket and saw he was hooked to my #16 parachute Adams!  He starts flying around at the end of the tippet and started to get wrapped around my arm.  I’m freaking out at this point not believing I caught a bat and was swinging him and my arm around wildly.  I mini-roll casted him back into the water so he couldn’t fly around.  I knew I needed to break this thing off, but wanted to keep the tag on the fly as short as possible.  Inching up the line within a foot of him I accidentally popped him out of the water and he came after me again.  I flipped him back into the water and didn’t care at this point how much line was on him, so I broke him off, lifted him off the water a bit and the little guy flew away. As my heart rate is decreasing, I realized what I originally thought was a take was actually the bat taking my fly off the water and he was hooked the whole time.  I must have flicked him into the water the first time, he wasn’t getting a drink at all (less internet research now).  When I thought I was fighting him off I was actually winding him in closer to me and he somehow grabbed on to the front of my vest to save himself from drowning.  Glad no one else was on the river to hear the expletives during the ordeal.

I posted my experience on a local fly fishing web site and immediately got some great comments, recipes for barbequed bat and the like, but also got some serious suggestions to get checked for rabies.  I hadn’t thought about that possibility.  The medical facility for my company was right next door, so I thought I’d go over and see what they thought.  After they stopped laughing, I was admitted and we called the county health department.  The county folks said it wasn’t a laughing matter, that bats do sometimes carry rabies.  “Did the bat bite you?” they asked.  I said I didn’t think so.  They said bat’s teeth are so tiny and sharp you might not know if you had been bitten.  “Did you come in skin contact with the bat?” they asked.  A bat’s saliva, urine and feces can also transmit rabies.  I told them I was so busy sword fighting with him I couldn’t remember.  The county recommended that I get the rabies vaccination since I could not be sure and I didn’t keep the bat for testing.  Eight shots the first day then four more over the next few weeks was not much fun.  I wish I had thought about what I’d do if I ever caught a bat before this happened.

Many of us fish in the early to late evening to take advantage of the hatch and so do the bats.  A bat may sense your fly, but not the 6X tippet attached to it.  Aside from eating lots of garlic, here are some recommendations on what to do if you hook a bat:

DO NOT TOUCH THE BAT or let it get close to you!

You want to break your line off and release the bat, ensuring your safety. Chances are the bat will not willingly fly into the water but if it does, lead it downstream away from you.  If it continues to fly away from you, reel in until the bat is at your rod tip.  Clip you tippet, leader or line if possible to reduce your chances of skin contact.  Thoroughly wash all remaining line, your rod and reel.   If you are bitten or come in skin contact with the bat, and feel confident enough he is well hooked, leave the water and find a way to contain the bat.  The bat can then be checked for rabies and possibly save you a lot of pain. Should you get bitten, come in skin contact or are unsure if you came in contact, call your local county health department or local emergency room.  Rabies is FATAL!